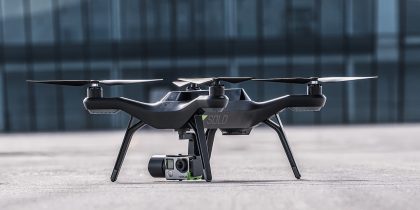 Gopher Protocol Inc (OTCMKTS:GOPH) is a micro-cap player ostensibly in the internet-of-things space that has been ripping higher over the past two months of trading, moving as much as 550% in that time. One of the key catalysts along the way was the company’s introduction of its “dDrone” technology, which reportedly uses Artificial Intelligence (AI) to create what is believed to be the world’s first” Smart Drone.” Gopher AI drone technology uses machine learning to give drones advanced flight capabilities. Gopher’s AI drone technology can solve complex problems related to geo-locations, weather conditions and obstacle avoidance.
However, we have also seen some improvement in terms of financial performance over that time, with the company issuing a press release a few weeks proclaiming earnings for the three months ended September 30, 2017 of $4,471,626 compared to $45,000 for the three months ended September 30, 2016. In addition, the Company’s total liabilities and stockholder’s equity rose from $18,543 for the period ended December 31, 2016 (audited) to $9,380,486 for the period ended September 30, 2017. That was further backed up by its most recent release, which showed 2 years of audited data.
Gopher Protocol Inc (OTCMKTS:GOPH) bills itself as a development-stage Native IoT creator, developing Internet of Things (IoT) and Artificial Intelligence enabled mobile technology.
The Company has a portfolio of Intellectual Property that when commercialized will include smart microchips, mobile application software and supporting cloud software. The system contemplates the creation of a global network. The core of the system will be its advanced microchip technology that can be installed in any mobile device worldwide.
Gopher envisions this system as an internal, private network between all enabled mobile devices providing shared processing, advanced mobile database management/sharing and enhanced mobile features.
Moreover, Gopher Protocol Inc. engages in the process of developing a real-time, heuristic based, mobile technology. Its technology consists of a smart microchip, mobile application software, and supporting software. The company was formerly known as Forex International Trading Corp. and changed its name to Gopher Protocol Inc. in February 2015. Gopher Protocol Inc. was founded in 2009 and is headquartered in Santa Monica, California.
Find out when $GOPH stock reaches critical levels. Subscribe to FinanceRegistrar.com Right Now by entering your Email in the box below.

According to its recent release, there is also a setback to be navigated: Gopher recently experienced the loss of the services of TIO Networks, a subsidiary of Paypal Holdings Inc. This will impact the Gopher’s 4th quarter and possibly 1st quarter 2018 earnings. As a result of the disruption, Gopher has accelerated the rollout of its own network into the acquired 15,000+/- locations.
Gopher CEO Greg Bauer commented, “Even though the decision by TIO or PayPal, came as a total surprise, we believe in the long term that we are going to be stronger and in a better position to serve the needs of our customers, by deploying and demonstrating our new Gopher network technology more rapidly. Once and if Gopher obtained funding and has deployed its own network, we expect our margin will increase through the goal of reducing our network operating costs.”
“It is extremely rewarding to present our consolidated financials to the public, as it is creating a massive difference to the quality of discussions we can have with our suppliers, investors, and potential acquisitions. Our financial reports now reflect the potential of our team and Company” Greg concluded.
Traders will note a bit less than 170% piled on for shareholders of the company during the trailing month, a rally that has pushed up against longer standing distributive pressure in the stock. However, GOPH is a stock who’s past is littered with sudden rips. Moreover, the listing has registered increased average transaction volume recently, with the past month seeing above 500% over the long run average.
It pays to take note of this fact due to the tiny float size in the stock (of 6.1M shares). This type of thing is something to watch out for: with such a tight trading float, this kind of ramping interest can force a supply-shock squeeze.
Earning a current market cap value of $68.9M, GOPH has virtually no cash on the books, which is balanced by virtually no total current liabilities. One should also note that debt has been growing over recent quarters. GOPH is pulling in trailing 12-month revenues of $4.6M. In addition, the company is seeing major top-line growth, with y/y quarterly revenues growing at 9836.9%. You can bet we will update this one again as new information comes into view. Sign-up for continuing coverage on shares of $GOPH stock, as well as other hot stock picks, get our free newsletter today and get our next breakout pick!
Disclosure: we hold no position in $GOPH, either long or short, and we have not been compensated for this article.