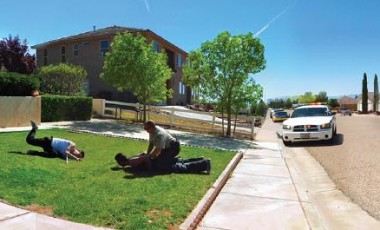 Virtra Inc (OTCMKTS:VTSI) has been running up the charts for quite some time, with that move accelerating recently on the strength of clear indications of government contracts now in play for the stock at a time when its product line is gaining a ton of free press by implication. The chart shows 35% piled on for shareholders of the company during the trailing month.

VTSI shares are actually doing even better than that, with the past couple weeks seeing more than 50% in gains. But if you pan back further, you see a true growth story tracing itself out in a respectable organic manner. This stock is up over 7000% since 2008, and over 600% since 2014. It’s all one steady trend. This year, VTSI shares are up a sweet 200%. In addition, VTSI is making real money, with trailing revs already coming in at $17.26M, a number that is clearly growing on the top line at nearly 10%. However, that growth rate may be about to accelerate dramatically, which is why we’re taking a close look at this one now.
Virtra Inc (OTCMKTS:VTSI) bills itself as a company that develops, sells, and supports use-of-force and marksmanship firearms training simulators in Arizona and internationally.

The company sells its simulators and related products through a direct sales force and distribution partners.

Find out when $VTSI reaches critical levels. Subscribe to OracleDispatch.com Right Now by entering your Email in the box below.

As the company frames its own message, “VirTra is a global leading provider of the world’s most realistic and effective judgmental use of force simulators. VirTra is the higher standard in firearms training simulators, offering a variety of simulator platforms, powerful gas-powered recoil kits, and the patented Threat-Fire simulated hostile return fire system. VirTra’s products provide the very best simulation training available for personnel that are entrusted with lethal force and critical missions.”

In a time when discourse about the use of deadly force for government agencies and police is constantly a part of our media experience, it’s no wonder this stock is seeing plenty of action.

But this is more than a fad move from what we can see.

For example, the company just announced that it has received its third and fourth orders for delivery of law enforcement simulators under the previously announced indefinite delivery/indefinite quantity (IDIQ) contract by the United States Department of State (DOS) that could result in up to $40 million in revenue for law enforcement training simulator equipment and services over the order period, which expires in April 2021. These orders are valued at approximately $1.4 million and will consist of both multi and single screen training simulators, related accessories and training for three additional locations in Mexico and six new locations in Costa Rica.

“We are pleased to have received these delivery orders under our IDIQ contract with the DOS to supply additional firearm training simulator systems for the U.S. Foreign Assistance Program,” said Bob Ferris, Chairman and CEO of VirTra. “With these orders, we will have installed our training simulators in fifteen of the eighteen locations identified for this program to date, bringing the total value of the contracts that we have been awarded to approximately $2.6 million. We are proud to be working with the DOS and look forward to an ongoing and mutually beneficial relationship.”

At this time, carrying a capital value in the market of $45.9M, VTSI has a significant war chest ($4.07M) of cash on the books, along with total assets approaching $4.4M, which stands against virtually no total accumulated debt. In other words, as we noted at the outset, this is an example of organic growth at its finest. The balance sheet is in order, new growth is in the works, and the product is front and center in cultural consciousness. Recent action has extended the move massively, but this is certainly a company we will have on our radar. For continuing coverage on $VTSI and our other hot stock picks, sign up for our free newsletter today and get our next hot stock pick!