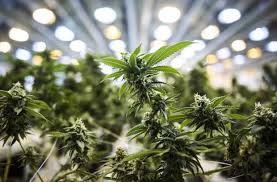 General Cannabis Corp (OTCMKTS:CANN) is a stock that’s been running up the charts in a dead sprint for two simple reasons: 1. According to two independent polls this month, California is going to vote to legalize marijuana for recreational use in 47 days, instantly tripling the size of the legal cannabis market in the US; and 2. The Company just closed on $3 mln in financing to expand business and consolidate liabilities at more favorable terms.

Altogether, we’ve seen this stock rip nearly 100% higher in 3 weeks, and likely with some good reason. True, CANN is a stock who’s past is littered with sudden rips that turned back around in a matter of days. But this one looks like sticky green. And there’s fewer than 9M shares on the float looking at shorts with a grin and a snicker right now.

General Cannabis Corp (OTCMKTS:CANN) trumpets itself as a company that provides services to the regulated cannabis industry in the United States. The company engages in the acquisition and leasing of cultivation space and related facilities to licensed marijuana growers and dispensary owners; and provision of security services, including on-site professionals, video surveillance, and cash transport to licensed cannabis cultivators and retail shops.

Find out when CANN reaches critical levels. Subscribe to OracleDispatch.com Right Now by entering your Email in the box below.

The Company bills itself as “the all-in-one resource for the highest quality service providers available to the regulated Cannabis Industry. We are a trusted partner to the cultivation, production and retail side of the cannabis business. We do this through a combination of strong operating divisions such as real estate, consulting, security, financing and the distribution of important infrastructure products to grow facilities and dispensaries. As a synergistic holding company, our subsidiaries are able to leverage the strengths of each other, as well as a larger balance sheet, to succeed.”

That’s quite a pitch.

As a jack of all trades, multi-tentacled pick and shovel tent, general growth in the number and size of other businesses able to thrive in the cannabis space should be the important metric for gauging future potential growth for CANN. And, as noted above, that is precisely what looks so promising right now for the Company.

With this week’s news of increased financial resources, they should have the ammo to take advantage of that opportunity.

Specifically, the Company issued $2.8 million of senior secured promissory notes and an aggregate of 8,400,000 warrants to purchase common stock. The notes bear interest at 12% per annum and are secured by all of the Company’s assets.

The proceeds of this debt raise will be used primarily to fund the Company’s expansion, repayment of existing mortgages, senior secured debt, and for working capital, as well as to pay any fees and expenses associated with the placement. This is as much about managing cost of capital as it is the creation of significant new working capital resources for new acquisitions.

The CEO was quoted as saying: “The impact of replacing existing debt and this new capital is exceptional. It positions General Cannabis to continue its strategy of acquiring emerging companies in the cannabis space. With this transaction, we consider ourselves well capitalized to take advantage of the many opportunities that we see emerging in the near future.”

At this time, carrying a capital value in the market of $22.3M, CANN has an extremely small store of cash on the books, with total assets greater than $3.5M, which must be weighed relative to an appreciable load ($2.59M) of total accumulated debt. As far as growth, it’s silly to extrapolate given the upcoming change in market size. The Company made about 3x on the top line in 1H 2016 as in 1h 2015. 1H 2017, after the expansion in market size, should be considerably more of a jump. Back of the napkin might put that number at something on the order of $10 mln for 2017.

They are adding debt, but still should be in good shape provided they manage expanded operations well. Hence, new C-level hiring quality might end up being the most important factor for this company over the next 6 months. The stock has already moved nearly 100% in the past 11 days, but the small float and strong narrative make this impossible to fade here. To get the full story on CANN subscribe below to Oracle Dispatch right now.