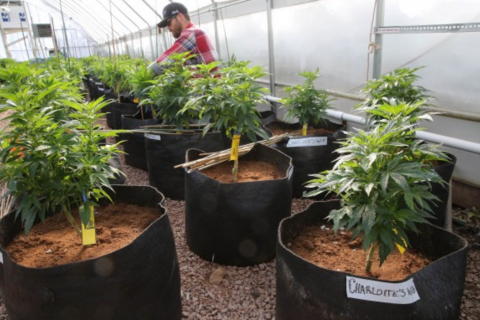 Terra Tech Corp (OTCMKTS:TRTC) is a stock that’s been more or less mired in a wide sideways range for the better part of the past 7 months. This is really somewhat odd considering that this may be one of the most recognizable “pot stock” brands to OTC traders, and considering the mania that gripped most of the marijuana space during the past few months.

The stock is up nearly 20% since we covered it a couple weeks ago, but it has not really been an outperformer since it popped several hundred percent back in March and April. That said, the situation may be worth watching. TRTC has a history of dramatic rallies. Moreover, the listing has registered increased average transaction volume recently, with the past month seeing 76% beyond what we have been seeing over the larger time frame.

Terra Tech Corp also operates as a retail seller of hydroponic produce, herbs, and floral products, which are distributed in the Midwest and the Northeast United States; and produces and sells a line of cannabis flowers and cigarettes, as well as a line of cannabis pure concentrates, including oils, waxes, shatters, and clears to dispensaries in California.

The main catalyst right now is a very clear and concerted attempt to get aggressive with public exposure by TRTC.

For example, the company just announced that its Chief Executive Officer, Derek Peterson, will present at the LD Micro Conference on December 6, 2016 at the Luxe Sunset Bel Air Hotel in Los Angeles, California.

The Corporate Presentation will be Webcast live. Mr. Peterson will also participate in a panel discussion on the future of the cannabis industry. Given his status as “The Public Spokesperson for Medical and Legalized Marijuana”, this should be a very interesting and potentially market-moving event.

In addition, Mr. Peterson just put out another presentation that can be found on the company’s website.

According to the release, “This is the only produce show in New York City and is the 2nd largest produce trade show in North America. The attendee make-up for this event is over 40% buyers with over 5,000 produce executives from around the world visiting the 400 exhibitors for 1-on-1 meetings.”

Earning a current market cap value of $164.1M, TRTC has a significant war chest ($3.40M) of cash on the books, alongside total assets a bit less than $70M, which is balanced by an appreciable load ($2.79M) of total accumulated debt. The balance sheet is in improving shape. Terra Tech Corp is also making real money, with trailing revs already coming in at $20.37M. In addition, the company is starting to see major topline growth, with quarterly y/y revs increasing at 244%. We will update this one again soon as events dictate. For continuing coverage on shares of $TRTC stock, as well as our other hot stock picks, sign up for our free newsletter today and get our next hot stock pick!