The String of Breakouts Continues for MYM NUTRACEUTICALS ORD (OTCMKTS:MYMMF) 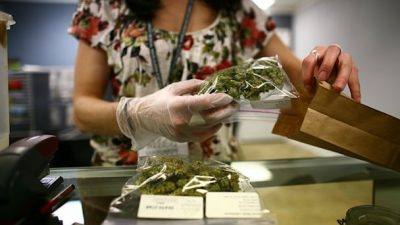 MYM NUTRACEUTICALS ORD (OTCMKTS:MYMMF) continues to break out higher. This is a stock we identified very early in its recent monstrous breakout trend, suggesting that it might be on the way toward the limelight as a leadership speculative play in the cannabis patch. That analysis turns out to have been quite prescient as shares of the stock have continued to skyrocket, rallying as much as 585% in the past 6 weeks.
Fanning the flames of that momentum, the company just announced that it has submitted the Confirmation of Readiness for a License under the Access to Cannabis for Medical Purposes Regulations (ACMPR) to Health Canada for the Sublime production facility in Laval, Quebec. The move is pursuant to the company’s developing play in the Laval project, which may stand to materially impact results over time.
MYM NUTRACEUTICALS ORD (OTCMKTS:MYMMF) promulgates itself as a company with a primary focus in developing high-end organic medicinal marijuana supplements and topical products. MYM also has an interest in the development of high-density farming facilities and technologies that allow MYM to expand its brand into the global market.
According to company materials, “MYM Nutraceuticals Inc. is an innovative company focused on acquiring Health Canada licenses to produce and sell high-end organic medicinal cannabis supplements and topical products. MYM has two production projects in Quebec that when completed will have over 1.5 million sq ft of production space. MYM is also a partner in a 1 million sq ft production project in New South Wales, Australia. Australia is a brand-new market that is just opening up and MYM is a leader there. To ensure a strong presence and growth potential within the industry, MYM is actively looking to acquire complementary businesses and assets in the technology, nutraceuticals and CBD sectors. MYM shares trade in Canada, Germany and the USA under the following symbols: (CSE: MYM) (OTC: MYMMF) (FRA: 0MY) (DEU: 0MY) (MUN: 0MY) (STU: 0MY).”
Find out when $MYMMF reaches critical levels. Subscribe to OracleDispatch.com Right Now by entering your Email in the box below.

As noted above, MYM has been somewhat of a newcomer to the ranks of the momentum action in the cannabis patch. But the momentum that we saw in mid-November has continued to hold up over time, with the stock breaking out from consolidations on several occasions over the course of the move. The company’s latest release promises to foment the speculative energy here as management looks to nail down new permits and move forward with its Laval project.
According to the release, “the Laval Facility – phase one of the Laval facility is 10,000 sf. Phase two, scheduled to be completed in 2018, will see the growing area expanded to 37,000 sf. This license will enable MYM to manufacture its branded medicinal THC and CBD products. The Laval project is estimated to produce gross sales of $27 million by 2019 with profit estimates of $17 million, based on current per gram prices of $8.50.”
“We are delighted to have met our stated target deadline of December 15 for the submission of the Confirmation of Readiness for a License,” said Rob Gietl, MYM CEO. “This submission is a key milestone for MYM and its partners, one of many more to come. We are looking forward to beginning production at the Laval facility and are committed to continuing to build value for the Province of Quebec and our shareholders.”
The chart shows a bit less than 120% added to share values of the listing over the past month of action. The situation may be worth watching. MYMMF has evidenced sudden upward volatility on many prior occasions. In addition, the stock has registered increased average transaction volume recently, with the past month seeing a bit less than 140% above its longer-run average levels.
Now commanding a market cap of $232.3M, MYMMF has a little over $400K in cash on the books, which compares with about $190K in total current liabilities. The company is pre-revenue at this point. This is an exciting story, and we look forward to a follow-up chapter as events transpire. Sign-up for continuing coverage on shares of $MYMMF stock, as well as other hot stock picks, get our free newsletter today and get our next breakout pick!
Disclosure: we hold no position in $MYMMF, either long or short, and we have not been compensated for this article.