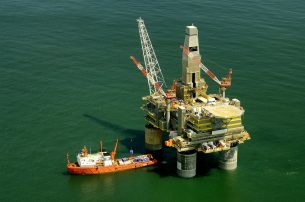 Hyperdynamics Corporation (OTCMKTS:HDYN) is a recent blow-up that we looked at earlier this month. The chart is a crater. The cause of the implosion was HDYN’s revelation to the market that its drilling and oil excavation hope off the coast of Guinea had failed during exploratory investigations: no hydrocarbons were located. That put a death brand on shares and likely filled the tape with new short interest.

However, when we last covered HDYN, we noted the following point in closing: “Given the complete absence of hope and the collapse in share values, any positive revelations – not that any will emerge – could conceivably create quite an upside stir.” That point was related to our discussion of the stock’s very small trading float – just 21M shares. Well, something similar has happened, as the company just came out with news that it did find some indications of hydrocarbons nearby. Though management reports the find as insufficient to develop commercially, they are now in discussions with their 50% partner SAPETRO and with the Guinea government to explore the potential of a new project with more promise in the same region.

Hyperdynamics Corporation (OTCMKTS:HDYN) trumpets itself as an emerging exploration company that is exploring offshore Guinea for oil and gas, in partnership with Tullow Oil (operator) and Dana Petroleum.

HDYN operates as an independent oil and gas exploration company. It engages in the acquisition, exploration, and development of oil and natural gas properties in the Republic of Guinea, Northwest Africa.

The company owns a 100% interest in a concession that covers an area of approximately 7,238 square miles in offshore Guinea. Hyperdynamics Corporation was founded in 1983 and is headquartered in Houston, Texas.

According to company materials, “Hyperdynamics is an emerging independent oil and gas exploration company that is exploring for oil and gas offshore the Republic of Guinea in Northwest Africa.”

Find out when $HDYN reaches critical levels. Subscribe to OracleDispatch.com Right Now by entering your Email in the box below.

As noted above, the stock is finding a little bit of a recovery bid as the company reveals it has found reason to explore the potential for a new project near its prior failed well candidate.

“Our immediate focus last week was a review of the Fatala-1 well log results from our targeted 75-meter-thick main channel, which unfortunately did not yield any oil shows above oil based mud signature while drilling or from an analysis of the cuttings taken from the well,” said Ray Leonard, Hyperdynamics President and Chief Executive Officer.

“However, from our detailed study of the logs conducted over the last several days, we identified five meters of calculated hydrocarbons in the upper Cenomanian channel located above our main target formation.  This five-meter sand has an average porosity of 17% and a hydrocarbon saturation of 61%. A minor background gas increase was also observed while drilling through this interval. A review by eSeis, our independent geophysical and petrophysical consultant, concurred with our findings.

“These results are technical calculations, and the thickness, porosity and saturation characteristics from this zone does not by itself make Fatala a commercially developable project, but we believe it could be an encouraging sign for the hydrocarbon potential of the offshore Guinea shelf,” he added.

Recent action has seen approaching 190% during the past week in terms of shareholder gains in the name, a rally that has pushed up against longer standing distributive pressure in the stock. Market participants may want to pay attention to this stock. HDYN is a stock whose past is littered with sudden rips. What’s more, the name has seen a growing influx of trading interest, with the stock’s recent average trading volume running a bit over 940% beyond what we have been seeing over the larger time frame.

It pays to take note of this fact given the stock’s limited trading float of 21M shares, as discussed above. With shorts likely pressing, a small float can provide an element of combustibility.

Currently trading at a market capitalization of $5.7M, HDYN has a reserve ($591K) of cash on the books, which compares with virtually no total current liabilities. The company is pre-revenue at this point. This is an exciting story, and we look forward to a follow-up chapter as events transpire. Sign-up for continuing coverage on shares of $HDYN stock, as well as other hot stock picks, get our free newsletter today and get our next breakout pick!

Disclosure: We hold no position in $HDYN, either long or short, and we have not been compensated for this article.