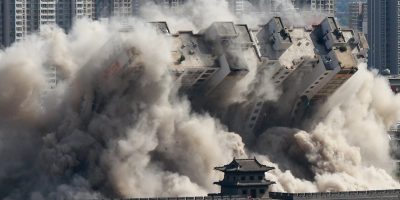 Hyperdynamics Corporation (OTCMKTS:HDYN) is not a pretty sight. HDYN stock completely collapsed in Friday’s action following the company’s announcement that its central project – the Fatala-1 exploration well drilling project – had progressed as far as it could possibly go down into the earth and no oil came a-bubblin’ up. The company stated that the well will be plugged and abandoned. The news was devastating for shareholders, as the stock imploded, losing nearly 94% in one trading session. The entire move came on a gap down as the company released the news pre-market.
On an interesting note, we would normally expect at least some evidence of a leak of this information – it must have been known that this was becoming increasingly likely by those involved in the project in recent days. And yet, there is no real semblance of major selling in advance of the announcement. The press release was about as stark as one can imagine: the company “announced that the Fatala-1 exploration well drilled offshore the Republic of Guinea in Northwest Africa has reached its total drilling depth and did not encounter hydrocarbons.”
Hyperdynamics Corporation (OTCMKTS:HDYN) trumpets itself as an emerging exploration company that is exploring offshore Guinea for oil and gas, in partnership with Tullow Oil (operator) and Dana Petroleum.
The company operates as an independent oil and gas exploration company. It engages in the acquisition, exploration, and development of oil and natural gas properties in the Republic of Guinea, Northwest Africa.
The company owns a 100% interest in a concession that covers an area of approximately 7,238 square miles in offshore Guinea. Hyperdynamics Corporation was founded in 1983 and is headquartered in Houston, Texas.
According to company materials, “Hyperdynamics is an emerging independent oil and gas exploration company that is exploring for oil and gas offshore the Republic of Guinea in Northwest Africa.”
Find out when $HDYN reaches critical levels. Subscribe to OracleDispatch.com Right Now by entering your Email in the box below.

As stated above, shares of the company collapsed on Friday amid a loss of hope in its ability to recover any hydrocarbons from its deep-water exploration project off the coast of Africa. According to the release, Fatala-1 was drilled in 2,897 meters of water and reached a total depth of 5,117 meters below sea level. The well encountered a 75-meter-thick Cenomanian sedimentary channel sequence, but it contained predominantly siltstone and clays with no hydrocarbon shows.
“We are very disappointed at the results of Fatala-1, considering the extremely promising geophysical data on the prospect,” said Ray Leonard, Hyperdynamics’ President and Chief Executive Officer.
“Hyperdynamics and our 50% partner in the well, SAPETRO, currently hold rights to the Guinea concession through September 21, 2017.  In the very near future, we will be studying the results of the well and evaluating any future options we may have for further activity in Guinea.
“Fatala-1 was the deepest-water well ever drilled offshore Africa, and I’m pleased to say that it was drilled safely and within expected budget,” Leonard added.
Traders will note just under -90% dashed out of shares in the past week, with even more than that chopped off on Friday alone. In addition, the listing has seen interest climb, with an increase in recent trading volume of just under 1400% beyond what we have been seeing over the larger time frame.
This is particularly important due to the relatively small float size in the stock (of 21M shares). Given the complete absence of hope and the collapse in share values, any positive revelations – not that any will emerge – could conceivably create quite an upside stir.
Currently trading at a market capitalization of $2.68M, HDYN has a chunk ($591K) of cash on the books, which is balanced by virtually no total current liabilities. The company is pre-revenue at this point and may have passed beyond any hope of attaining sales in the future at this point, though one can’t be entirely sure. This could still be an exciting story at some point, and we plan on keeping track of it. Sign-up for continuing coverage on shares of $HDYN stock, as well as other hot stock picks, get our free newsletter today and get our next breakout pick!
Disclosure: We hold no position in $HDYN, either long or short, and we have not been compensated for this article.