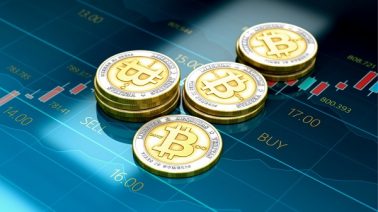 South American Gold Corp (OTCMKTS:SAGD) is the latest example of a company deciding its fate is better off tied to the cryptocurrency rocket ship. We have seen several instances of this phenomenon lately. And one can certainly understand why. SAGD offers another instructive example: upon announcing that the company has secured a development partner for the launch and distribution of the virtual currency, PotPons, shares immediately took flight, launching on record volume over 200% higher.
David Reeves, SAGD CEO, stated, “After much time and effort entertaining and considering different partnering opportunities, we are proud to announce that we have chosen to partner with Favored, Inc. (OTC: FVRD) for the market entry of PotPons virtual currency. Favored Inc.’s wholly owned subsidiary, Empire Mobile Studios, Inc., owns and developed www.Bittraderpro.com, which  we will utilize to bring PotPons to the marketplace and make it available for broad exchange and utilization.”
South American Gold Corp (OTCMKTS: SAGD) promulgates itself as an operational management company focused on enhancing shareholder value by acquiring and operating undervalued tech assets, utilizing its superior management team to bring hardcore management principles and discipline to these assets. The company is focused on the following business sectors: Health Care, Automotive, Internet, and Software.
The company has been touting itself as an exploration stage company, acquires, explores, and develops mineral properties primarily in North America. It primarily explores for gold and silver mineral deposits. The company has interests in the Baltimore Silver Mine, which consists of 3 patented mining claims covering approximately 60 acres and is located in Jefferson County, Montana; and the GB 2 Gold property comprising 9 unpatented mining claims covering approximately 180 acres and is located in the Black Rock Mining District of Yavapai County, Arizona. It also has a mining lease agreement in the New Light Mine Project comprising 2 unpatented claims located in Slate Creek Mining District in Whatcom County, Washington.
The company was formerly known as Grosvenor Explorations Inc. and changed its name to South American Gold Corp. in October 2010. South American Gold Corp. was founded in 2005 and is based in Atlanta, Geogia.
According to recent company materials, “South American Gold Corp is a publicly traded company on the OTC under the symbol SAGD, focused on enhancing shareholder value by acquiring and operating undervalued assets.”
Find out when $SAGD reaches critical levels. Subscribe to OracleDispatch.com Right Now by entering your Email in the box below.

Perhaps there is no better indication of which theme is the hottest among small and micro-cap stocks than where the operational pivots go. SAGD is one drop in an ocean of pivots into the digital currency, blockchain, crypto, and bitcoin-related space. And there will certainly be others, particularly as other companies see how the market responded to this shift.
“With the successful completion of this agreement, the company should be poised to have the PotPons virtual currency tradable by February, 2018,” Mr. Reeves continued. “Selecting the right market partner for this project was imperative to ensuring the launch success of the coin in market. We wanted to ensure we could achieve our short-term goals which will create the backbone of our structure for our long-term vision. We feel confident that Favored, Inc. is the right partner for us in developing a market for the coin as well as helping us develop and expand the customer base and marketplace.”
According to the company’s release, PotPons virtual currency was developed on the Ethereum blockchain technology following the ERC-20 standards. As the launch of PotPons enters the market the company will begin the process of adding the open-source to GitHub, allowing for PotPons to access to multiple cryptocurrency exchanges for P2P and providing a transparent view of the virtual currency.
Mr. Reeves concluded, “This is a great time for our company and our shareholders.  This partnership will provide us with the ability to bring the ambitious idea of PotPons Merchant Services System to market. The power of two public companies working together for the purpose of achieving one main goal will produce one great process for market entry.”
At this time, carrying a capital value in the market of $12.4M, SAGD has virtually no cash on the books, which must be weighed relative to virtually no total current liabilities. SAGD is pulling in trailing 12-month revenues of $32K. However, the company is seeing recent declines on the top-line on a sequential quarterly basis, with revenues falling at -68.9% as of its latest reporting period. You can bet we will update this one again as new information comes into view. Sign-up for continuing coverage on shares of $SAGD stock, as well as other hot stock picks, get our free newsletter today and get our next breakout pick!
Disclosure: we hold no position in $SAGD, either long or short, and we have not been compensated for this article.