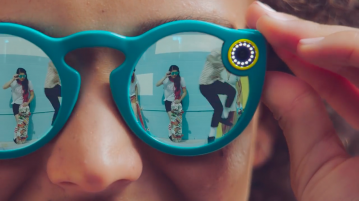 Snap Inc (NYSE:SNAP) is a tech darling and a recent IPO that could now be picked up at a discounted valuation. Well, that was quick.

It’s only been two weeks since the highly anticipated IPO of Snap Inc (NYSE:SNAP) and already investors are having second thoughts about what might be next for this California tech company. On March 2, the IPO priced at $17 and ended the first day of trading at $24.48 a share. After hitting a high of $29.44 on March 3, there has been a lot of selling since then.

So what’s wrong with this picture?

To begin with, SNAP insists on calling itself a “camera company” and not a “social media company.” Thus, the management team at SNAP presumably wants a tech company valuation rather than a social media valuation. In fact, some have suggested that SNAP really wants to be thought of as the next Apple – a really cool, innovative West Coast company that makes cool technology products.

Except there’s just one minor problem here – the only technology product that the company really makes are those $130 Spectacles – basically, a pair of sunglasses that can take video “snaps” and upload them to a Snapchat account.

As SNAP sees it, Snapchat is just a “camera app that helps people to communicate” and not a social media app. But just try telling that to tens of millions of daily Snapchat users. This is a company that pioneered the concept of the “snap” – a disappearing piece of ephemeral social media content.

Find out when $SNAP stock reaches critical levels. Subscribe to OracleDispatch.com Right Now by entering your Email in the box below.

Also, just like a media company, what Snapchat essentially does is sell advertising (via Snap Ads and sponsored filters and lenses). It also has “Publisher Tools” for creating “Publisher Stories.” That’s just a way of saying that big media brands can set up Snapchat accounts with a few extra bells and whistles.

So you have Instagram’s 600 million monthly users and Messenger’s 1 billion monthly users, all posing a threat to Snapchat’s future ability to bring in potential advertising dollars. No wonder SNAP would rather be known as a camera company – the competition must be a lot easier there than going up against a juggernaut like Facebook.

So all that’s led to a bit of a disconnect. Snapchat has a passionate millennial user base, and seems to have figured out what this highly desirable demographic wants. Advertisers seem ready to embrace Snapchat, but the company still hasn’t turned a profit — and doesn’t really plan to, at least anytime soon. It’s going to need to sell a lot of $130 Spectacles to break even.

Making matters even more complicated, the latest Wall Street analyst report set a price target of just $18 for SNAP. That’s pretty much an insult from the grown ups of Wall Street (many of whom presumably don’t use Snapchat), because the price target represents a huge decline from the current price and is just $1 over the initial public offering price of $17.

When you think about the beating that Twitter (another former tech darling) has been taking recently in the media, then it’s hard to see the name as anything more than a contrarian play at the moment. Until SNAP proves it can take on Instagram and win, it will remain a contrarian play.

But here’s the thing – at a current price of $19.50, you’d be picking up SNAP on the relative cheap. Instead of buying at a high, you’d be buying at a low. Nowhere to go but up. That is, if the company can actually figure out a way to become a next generation type of technology company. For more news on Snap Inc. (NYSE:SNAP) and other fast-moving penny stocks, please subscribe to OracleDispatch.com below.