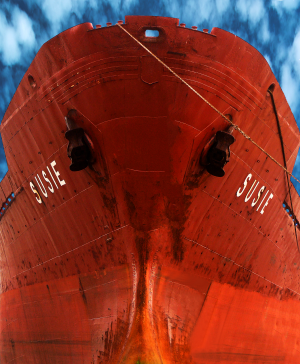 Seanergy Maritime Holdings Corp. (NASDAQ:SHIP) has been back on the move in a big way in recent days, and investors should take note given what it might it imply about all sorts of things. First off, the catalyst behind SHIP’s action is clearly macro in nature, which makes it much more interesting. The movement has been coming in sync with the Baltic Dry Index, which is an index of pricing for capacity units on dry bulk shipping carriers around the world. The Index has moved up nearly 45% in just the past 5 weeks. SHIP is a player in the space, and its shares generally respond well to increasing prices for its cargo capacity.
The action in the group is important to monitor because dry bulk shipping is like copper pricing or iron ore trade in that it signals something important about the health or lack of health of the global economy. One factor that is often quite important for any of these markets is the value of the US dollar in FX markets. As such, we have been seeing a strong decline in US dollar pricing among major currencies over the past several months. The effect of this is to make emerging market debt denominated in dollars easier to service. That tends to incentivize many such markets toward more aggressive spending on infrastructure build-out, which leads to greater demand for materials that are carried principally on ships like those owned by SHIP.
Seanergy Maritime Holdings Corp. (NASDAQ:SHIP) trumpets itself as an international shipping company that provides marine dry bulk transportation services through the ownership and operation of dry bulk vessels.
SHIP owns a modern fleet of 11 dry bulk carriers consisting of 9 Capesizes and 2 Supramaxes with a combined cargo-carrying capacity of approximately 1,682,582 dwt and an average fleet age of 8.1 years. The company was formerly known as Seanergy Maritime Corp. and changed its name to Seanergy Maritime Holdings Corp. in January 2009.
Find out when $SHIP reaches critical levels. Subscribe to OracleDispatch.com Right Now by entering your Email in the box below.

According to company materials, “Seanergy Maritime Holdings Corp. is an international shipping company that provides marine dry bulk transportation services through the ownership and operation of dry bulk vessels. The Company currently owns a modern fleet of eleven dry bulk carriers, consisting of nine Capesizes and two Supramaxes, with a combined cargo-carrying capacity of approximately 1,682,582 dwt and an average fleet age of about 8.1 years. The Company is incorporated in the Marshall Islands with executive offices in Athens, Greece and an office in Hong Kong. The Company’s common shares and class A warrants trade on the Nasdaq Capital Market under the symbols “SHIP” and “SHIPW”, respectively.”
As noted above, we are seeing some recent strength in shares of the company, which we attribute to a combination of a strengthening global economy and a weakening US dollar. That’s a combination that often powerfully works in favor of the dry bulk shippers as well as major commodity producers. Management’s notes following SHIP’s latest earnings highlight some of the key dynamics involved in understanding this stock.
“In the first quarter of 2017, we experienced the first signs of market recovery, which was reflected mostly in the Capesize market. Spot rates peaked at $20,000 per day and asset values recovered significantly from the historical lows of 2016. In respect of financial performance, our larger fleet, as well as the improved market conditions, led to a substantial increase in our revenues by more than 90% compared to the same period last year. In addition, we entered into a lucrative agreement with one of our lenders that will result in an expected gain and equity accretion of $11.4 million that corresponds to more than 30% increase in our shareholder equity upon closing of this transaction in 3Q of 2017.”
Traders will note 32% added to share values of the stock over the past week of action, a rally that has pushed up against longer standing distributive pressure in the stock. However, SHIP is a stock whose past is littered with sudden rips. Furthermore, the stock has witnessed a pop in interest, as transaction volume levels have recently pushed 65% beyond what we have been seeing over the larger time frame.
Currently trading at a market capitalization of $35.50M, SHIP has virtually no cash on the books, which compares with virtually no total current liabilities. SHIP is pulling in trailing 12-month revenues of $41M. In addition, the company is seeing major top line growth, with y/y quarterly revenues growing at 90.3%. We will update the story again soon as developments transpire. For continuing coverage on shares of $SHIP stock, as well as our other hot stock picks, sign up for our free newsletter today and get our next hot stock pick!
Disclosure: we hold no position in $SHIP, either long or short, and we have not been compensated for this article.