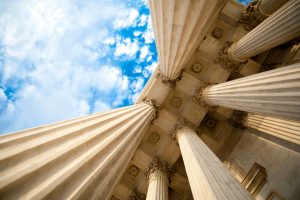 Rimrock Gold Corp (OTCMKTS:RMRK) is probably an early bird in a developing trend. Whenever you get serious buzz in an OTC market space, you get a rash of pivots and reverse mergers. Companies that were never in XYZ business are suddenly either heading in that direction or giving up their tickers to someone else who is. Last year, it was cannabis. This year, it’s cryptocurrency. It’s inevitable. And we don’t for a second mean to disparage the process. Some legitimate top trades spring up from such trends. In any case, it would appear RMRK is the latest such example.
I give you a note from the 10-Q of CRCW (it’s awfully confusing – the company was in the midst of a reverse merger into “The Crypto Company”, and that whole mess is now moving, apparently, into RMRK). Suffice it to say, we are clearly seeing RMRK moving into being “The Crypto Company”, hence the 3 billion shares traded over the past two days, and the 1,900% gains: “Pursuant to a Note Purchase Agreement dated as of March 27, 2017 by and between the Company and Rimrock Gold Corp, (“Rimrock”), the Company agreed to fund up to $300,000 to settle outstanding convertible debt of and accounts payable by and on behalf of Rimrock, for the ultimate acquisition of Rimrock, a currently inactive public company located in Las Vegas, Nevada. The Company expects to consummate the acquisition in the fourth quarter of 2017. For the period from inception to June 30, 2017, the Company advanced $107,000 on behalf of Rimrock to settle the aforementioned liabilities.”
Rimrock Gold Corp (OTCMKTS:RMRK) had trumpeted itself as a Nevada corporation acting as a diversified mineral exploration company focused on identifying, acquiring, advancing, and drilling high-grade Gold-Silver metal exploration projects in Nevada.
However, it would now appear that the ticker is destined to represent The Crypto Company, which is currently understood to be a wholly owned subsidiary of Croefit (CROE), which had been presenting itself as a fitness clothing and apparel company.
Find out when $RMRK reaches critical levels. Subscribe to OracleDispatch.com Right Now by entering your Email in the box below.

Obviously, we are dealing with what amounts to probably the winner of the annual contest for most complicated and convoluted organizational strategy on the planet. But nonetheless, it is also a stock that has exploded higher as it becomes – through however complicated a process – the newest publicly traded player on the crypto playing field.
The proof comes from the note posted above from Croe’s 10-Q, and from this additional note: “On June 7, 2017 (the “Transaction Date”), as a result of the Stock Sale, the Stock Dividend and the Share  exchange, each as hereinafter described, (i) The Crypto Company, a Nevada corporation (“Crypto”), became a wholly owned subsidiary of Croe; (ii) all of the former shareholders of Crypto became shareholders of Croe, on a pro-rata basis; and (iii) the operations of Croe solely consisted of the operations of Crypto.”
That leaves this company as the following: “We are developing proprietary technology, including trading management and auditing software, tools and processes, to assist both traditional companies, from start-up businesses to well-established companies, and decentralized autonomous organizations with their design protocol and connect such companies and teams to the resources required to operate and/or trade in cryptocurrencies..”
Recent action has seen 1800% piled on for shareholders of the listing during the trailing month. This is emblematic of the stock. RMRK is a stock who’s past is littered with sudden rips. Furthermore, the name has witnessed a pop in interest, as transaction volume levels have recently pushed approaching 1200% beyond what we have been seeing over the larger time frame.
At this time, carrying a capital value in the market of $1,56M, RMRK, as an entity prior to this transaction, had virtually no reported cash on the books, balanced by about $293K in total current liabilities. That said, that may no longer be a part of the equation. The most important thing you can say here is that this is a ticker now, it would appear, in the crypto game. Hence, you know we will be hot on its tail going forward. For continuing coverage on shares of $RMRK stock, as well as our other hot stock picks, sign up for our free newsletter today and get our next breakout pick!
Disclosure: We hold no position in $RMRK, either long or short, and we have not been compensated for this article.