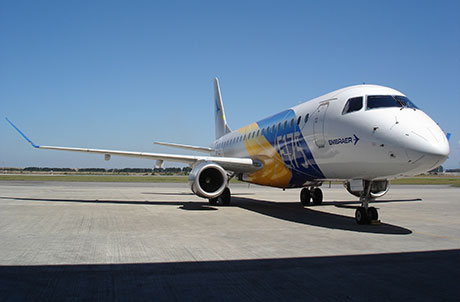 Republic Airways Holdings Inc. (OTCMKTS:RJETQ) is a stock that’s been pressing lower following an announcement that it filed its Plan of Reorganization and a related Disclosure Statement with the U.S. Bankruptcy Court for the Southern District of New York. The Plan sets a course for the Company to emerge during the first quarter of 2017, and was filed with the full support of the Creditors Committee.

The chart shows about -30% yanked out of share pricing for the company in the past week, with the larger trend in the name in the same basic direction. That said, RJETQ has a track record that includes a number of dramatic bounces. What’s more, the listing has seen an influx in interest of late, with the stock’s recent average trading volume running a bit less than 120% over the long run average. But that doesn’t suggest you want to move on this at the moment.

Republic Airways Holdings Inc. (OTCMKTS:RJETQ) is an airline holding company that owns Republic Airline and Shuttle America Corporation. The Company trumpets itself as a provider of scheduled passenger services.

The airlines offer approximately 1,000 flights daily to 105 cities in 38 states, Canada, the Caribbean, the Bahamas, and Mexico through Republic’s fixed-fee codeshare agreements under our major airline partner brands of American Eagle, Delta Connection and United Express. The company was founded in 1996 and is headquartered in Indianapolis, Indiana.

Find out when RJETQ stock reaches critical levels. Subscribe to OracleDispatch.com Right Now by entering your Email in the box below.

The emerging inference on our part is that this is not likely to preserve shareholder value on a legacy basis for common holders. However, it will certainly put this stock in a strong position next quarter. In addition, it has another few weeks to trade under this ticker, and may still as of yet present opportunities for traders. Just please make sure to be cautious with the play in terms of swing positioning. This is not likely to be more than a day trade vehicle.

The airline space was in fact one of Warren Buffett’s largest allocation additions this Fall, and the transports sector in general continues to suddenly be in a strong leadership position within the broad market sector landscape.

The Plan outlines that the Company will emerge as a single air carrier operating the world’s largest fleet of E170/E175 aircraft, under the Republic Airline Inc. name. The Disclosure Statement further discusses the significant operational and economic benefits the Company has achieved in Chapter 11, including the renegotiation and extension of its capacity purchase agreements with American, Delta, and United; favorable amendments to all core supplier and services agreements; the accelerated removal of out-of-favor aircraft; and the restructuring of the debt on over 80 EJET aircraft. Collectively, the accomplishments achieved in Chapter 11 will significantly streamline the Company’s operations, enhance its competitiveness, allow for new E175 deliveries for United beginning in April of 2017, and insures the Company has access to adequate liquidity to support its long-range business plan.

“Today’s announcement illustrates what a team can accomplish when it’s focused on delivering an exceptional experience for its customers and associates. We have achieved each of the restructuring goals set at the onset of this case, while restoring our airline to a level of operational excellence unmatched in our industry,” said Bryan Bedford, Republic’s Chief Executive Officer. “The airline has achieved a 99.7% controllable completion rate in 2016 and is exceeding that level of performance in Q4. These collective results are a true testament to our people and how committed they are to the continued transformation of our airline.”

Currently trading at a market capitalization of $22.1M, RJETQ is likely going to be a worthless asset in terms of common shares. We can’t be certain until December 8 when the court passes its own opinion. But we may be on the verge of seeing the rebirth of a new play that will, itself, represent a very interesting small cap story in the market. As that story continues to define itself, we will be tracing out its contours with rapt attention. For continuing coverage on shares of $RJETQ stock, as well as our other hot stock picks, sign up for our free newsletter today and get our next hot stock pick!