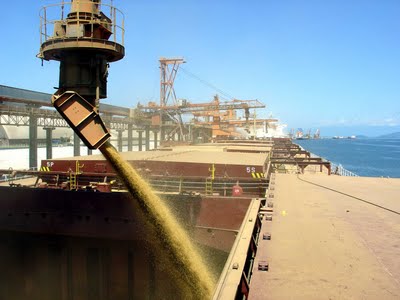 Paragon Shipping Inc. (OTCMKTS:PRGNF) is a penny stock in the red hot dry bulk shipping space that has a base in the heart of the sector’s geographic core in Greece. The stock has been in a death spiral (along with most dry bulk players) for the past 8 years as shipping rates wallow in a structural bear market. However, since last week’s surprise election of Donald Trump as US President-elect, the shipping space has gone into a wild and frenzied short squeeze following a series of dramatic reverse splits in recent months by many of the sector’s key plays.

The apparent catalyst for the movement is the specter of a monstrous one trillion dollar fiscal stimulus bill possibly on the horizon in the US next year that would likely be centered around an upgrade of US infrastructure (hospitals, highways, airports, rails, bridges, canals, subways, electricity grids, etc). All of that stuff will be made of heavy, bulky materials, most of which will come from outside the US.

It engages in the ocean transportation of drybulk cargoes, including commodities, such as iron ore, coal, grain, and other materials. Paragon Shipping Inc. was founded in 2006 and is based in Voula, Greece.

Find out when PRGNF stock reaches critical levels. Subscribe to OracleDispatch.com Right Now by entering your Email in the box below.

We’ve witnessed 130% tacked on to share pricing for the listing in the past week, a bounce that has taken root amid largely bearish action over the larger time frame. The situation may be worth watching. PRGNF has a track record that includes a number of dramatic bounces. In addition, the company has registered increased average transaction volume recently, with the past month seeing topping 730% over the long run average. Traders should note this as important given the stock’s extremely small trading float of less than 3.9M shares. Traders should not overlook this combination, as with such a tight trading float, this kind of ramping interest can force a supply-shock squeeze.

The only company-specific catalyst we have seen of late was notice that the company’s offer to exchange all properly delivered and accepted 8.375% senior notes due 2021 issued in $25.00 denominations with CUSIP number 69913R-507 (each a “Paragon Note” and collectively the “Paragon Notes”) for shares of common stock (the “Common Stock”) of Paragon (the “Exchange Offer”) at 5:00 p.m. (New York City time) on October 31, 2016 (the “Expiration Date”).

The market handled the news reasonably well, and has moved on toward the more interesting catalyst offered by the ramp in the Baltic Dry Index. The Index climbed by 19 points, reaching 1084 points in Tuesday’s action.

For those unfamiliar with the measure, the Baltic Dry Index is compiled by the London-based Baltic Exchange and covers prices for transported cargo such as coal, grain and iron ore. The index is based on a daily survey of agents all over the world. Baltic Dry hit a temporary peak on May 20, 2008, when the index hit 11,793. The lowest level ever reached was on Wednesday the 10th of February 2016, when the index dropped to 290 points.

Now commanding a market cap of $203K, PRGNF has an extremely small store of cash on the books, which compares with an appreciable load ($97.11M) of total accumulated debt. This is a dreadful balance sheet and could only be conceivably healed by a massive spike in growth. Such a shift is unlikely to unfold at this point, and longer-term investors will need to brave a likely wave of further dilution here. But traders may find some interesting moves in both directions given the rampant emotion and momentum geared up in the shipping space and the very small share float in this stock. For continuing coverage on shares of $PRGNF stock, as well as our other hot stock picks, sign up for our free newsletter today and get our next hot stock pick!