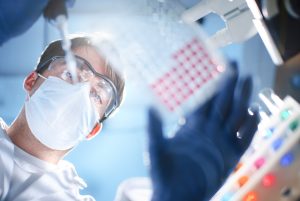 OXIS International, Inc. (OTCMKTS:OXIS) is a penny stock that appears to have caught some increased attention over the last few trading sessions as prices get a little traction in bounce mode after a long and steady decline. The most obvious catalyst for the shift in mode of behavior over that period is the company’s announcement that the Food and Drug Administration has cleared the way for the Company’s wholly owned subsidiary, Oxis Biotech Inc., to begin FDA Phase 2 clinical trial research for its cancer treatment, OXS-1550, in the treatment of lymphoma and leukemia.

According to its latest release, Oxis Biotech, a targeted immuno-oncology company focused on novel antibody constructs, owns the worldwide rights to commercialize OXS-1550. As for the action, we’ve witnessed 85% tacked on to share pricing for the stock in the past week, but this action is running counter to the larger trend in the name. This is emblematic of the stock. OXIS is a stock who’s past is littered with sudden rips. Furthermore, the company has seen an influx of interest lately, with the stock’s recent average trading volume running greater than 580% over the long-run average.

OXIS International, Inc. (OTCMKTS:OXIS) frames itself as a company that, through its wholly owned subsidiary of Oxis Biotech, Inc., discovers, develops, and commercializes therapeutics from its proprietary product platform in various disease areas in the United States. The company is developing drugs focused on the treatment of cancer.

According to company materials, “Oxis Biotech is an immuno-oncology focused company developing innovative drugs focused on the treatment of cancer and other unmet medical needs. OXIS’ lead drug candidate, OXS-1550 (DT2219ARL) is a novel bispecific scFv recombinant fusion protein-drug conjugate composed of the variable regions of the heavy and light chains of anti-CD19 and anti-CD22 antibodies and a modified form of diphtheria toxin as its cytotoxic drug payload. OXS-1550 targets cancer cells expressing the CD19 receptor or CD22 receptor or both receptors. OXS-2175, is a small molecule therapeutic candidate targeting the treatment of triple-negative breast cancer (TNBC). In in vitro and in vivo models of TNBC, OXS-2175 demonstrated the ability to inhibit metastasis.”

Find out when $OXIS stock reaches critical levels. Subscribe to OracleDispatch.com Right Now by entering your Email in the box below.

As noted above, the company’s lead drug candidate was apparently just cleared to begin phase 2 trials. That is actually generally an enormous milestone for a pipeline asset. The path to get to a phase 2 is long and arduous. A drug in phase 2 for cancer has a seat at the table. If the results go well, this stock will skyrocket. We’re not saying it will go well. Just that, if it does, welcome to the big boy club.

As pointed out in the release, the FDA Phase 2 clinical trial will be conducted with Oxis’ partner, the University of Minnesota’s Masonic Cancer Center. Researchers at the University of Minnesota recently completed a FDA Phase 1 trial of OXS-1550. The Phase 1 portion of the trial completed a safety review to determine the safe and effective dose of the drug. OXS-1550 uses a proprietary immunoconjugate platform technology, as a treatment for leukemia and other blood-born cancers. What sets OXS-1550 (DT2219ARL) apart from other treatments, such as chemotherapy, is that it is designed to specifically target and kill cancer cells minimizing damage to normal tissues.

“This milestone represents a major step forward for our technology. The product has performed well in its phase 1 studies in blood cancers and we look forward to positive results in Phase 2,” said Anthony Cataldo, Chairman and Chief Executive Officer of Oxis. “This next generation drug has the possibility of treating a number of different liquid tumors and, if successful, will drastically change the paradigm now being developed that relies on highly expensive autologous cell therapies such as presented by Kite Pharma, Inc. (KITE), Juno Therapeutics, Inc. (JUNO) and other autologous or semi-autologous and adoptive therapy approaches currently under development.”

Now commanding a market cap of $2.9M, OXIS has a bankroll ($154K) of cash last reported on the books, which must be weighed relative to about $10.9M in total current liabilities. One should also note that debt has been growing over recent quarters. The company is pre-revenue at this point. We will update the story again soon as developments transpire. For continuing coverage on shares of $OXIS stock, as well as our other hot stock picks, sign up for our free newsletter today and get our next hot stock pick!