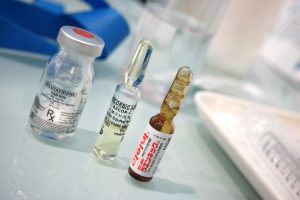 Northwest Biotherapeutics, Inc (OTCMKTS:NWBO) shares have been under pressure, but recently found support and pushed up off of a price zone that defines a great deal about how this stock has traded over the past 4-6 months. If it were to move higher from here, one could make a case for a large basing pattern coming into place. But whether or not that’s possible will have a great deal to do with how NWBO executes and how well it communicates its story to the marketplace.
The latest release from NWBO is its announcement that Dr. Marnix L. Bosch, MBA, PhD and Chief Technical Officer of NW Bio presented an update on the Phase III Trial of DCVax-L for newly diagnosed GBM and the DCVax-Direct Trials at the Cambridge Healthtech Institute’s Immuno-Oncology Summit in Boston, Massachusetts. NWBO posted plenty of details, but suffice it to say, the early indications are promising, which sent shares higher. The move has taken NWBO as much as 15-20% higher off its recent pivot lows over the past 3 days.
Northwest Biotherapeutics, Inc (OTCMKTS:NWBO) bills itself as a development stage biotechnology company focused on discovering, developing and commercializing immunotherapy products that generate and enhance immune system responses to treat cancer.
NWBO operates in the United States and is incorporated in Delaware, USA.
According to company materials, “Northwest Biotherapeutics is a biotechnology company focused on developing personalized immunotherapy products designed to treat cancers more effectively than current treatments, without toxicities of the kind associated with chemotherapies, and on a cost-effective basis, in both the United States and Europe.  The Company has a broad platform technology for DCVax dendritic cell-based vaccines.  The Company’s lead program is a 331-patient Phase III trial in newly diagnosed Glioblastoma multiforme (GBM). GBM is the most aggressive and lethal form of brain cancer, and is an “orphan disease.” The Company is also pursuing a Phase I/II trial with DCVax-Direct for all types of inoperable solid tumor cancers. It has completed the 40-patient Phase I portion of the trial, and is preparing for the Phase II portion. The Company previously conducted a Phase I/II trial with DCVax-L for metastatic ovarian cancer together with the University of Pennsylvania.”
Find out when $NWBO reaches critical levels. Subscribe to OracleDispatch.com Right Now by entering your Email in the box below.

As noted above, shares of NWBO rebounded in recent days following the delivery of an update of several studies of varying points of efficacy for its brain tumor treatment pipeline. Probably the big headline was the note that its 331 patient Phase III GBM Trial appears, based the trial metrics reported in the Company’s industry presentation during ASCO, may include “multi-year survival and a long tail”.
According to the release, the presentation also took note of encouraging projections by independent analysts in regard to the median overall survival (OS) and median progression free survival (PFS) based on the trial metrics reported by the Company during ASCO.
Linda Powers, CEO of NW Bio, noted that “I am glad that the occasion of  Marnix’s updates at this scientific conference have provided us with the opportunity to review here in one place all the encouraging and consistent DCVax data we periodically have released to date.  We are proud that our body of work has consistently led to encouraging results in many different types of cancer.”
We’ve witnessed 15% piled on for shareholders of the stock during the trailing week, a rally that has pushed up against longer standing distributive pressure in the stock. This is emblematic of the stock. NWBO has a track record that includes a number of dramatic bounces. In addition, the stock has benefitted from a jump in recent trading volume to the tune of 20% above the average volume levels in play in this stock over the longer term.
Now commanding a market cap of $54.36M, NWBO has virtually no cash on the books, which is balanced by about $22.2M in total current liabilities. NWBO is pulling in trailing 12-month revenues of $386K. However, the company is seeing declines on the top line on a quarterly y/y basis, with revenues falling at -43.9%. We will update the story again soon as further details emerge. Sign-up for continuing coverage on shares of $NWBO stock, as well as other hot stock picks, get our free newsletter today and get our next breakout pick!
Disclosure: we hold no position in $NWBO, either long or short, and we have not been compensated for this article.