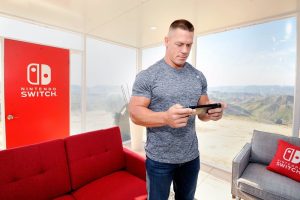 Nintendo Co., Ltd (ADR) (OTCMKTS:NTDOY) The legendary game maker has a new game-changer.  All signs continue to point to a major rebound at Nintendo Co., Ltd (ADR) (OTCMKTS: NTDOY), which is experiencing a breakout performance in 2017. In fact, on May 29, shares of NTDOY hit their highest level since 2008. The upward surge in the share price of NTDOY is based on continued exuberance about the company’s latest gaming system, Switch.

The primary source of investor confidence, of course, was the release of the Nintendo Switch on March 3. That was the seventh major home video gaming console ever released by the company, and is on pace to be the bestselling ever. The company posted a huge March, reportedly selling 900,000 units. Then, it followed up with a very bullish April. Just weeks after the release of the Switch, Nintendo announced that it would order a production increase. Clearly, sales of the Switch far outpaced even the most optimistic projections from Nintendo.

Switch is designed to bridge the gap between TV-based console gaming (the type of entertainment experience that most people associate with Nintendo) and portable mobile gaming. The Switch has multiple modes of use: it can be used as a home console with a TV, as a tablet computer for on-the-go gaming, or as a shared tabletop experience for two or more gamers at one time.

Subscribe below and we’ll keep you on top of what’s happening before $NTDOY stock makes its next move.

Back in 2014, when Nintendo was in financial distress and many feared that the legendary entertainment and gaming company had finally lost its mojo, the company’s executives did not want to make a full-fledged move into mobile gaming in order to take on competitors like Zynga. Nintendo feared losing its brand identity.

Thus, you can view the Switch as a compromise solution – since it’s a hybrid gaming machine, it plays true to Nintendo’s origins and it’s still innovative enough to be a mobile gaming platform. This was a major product release, and by all signs, it was a major success.

And don’t forget about last summer’s huge blockbuster smash: Pokemon GO, an augmented reality video game for mobile users. In many ways, Pokemon GO was a game-changer and helped to set up the success of the Switch by getting Nintendo to think more in terms of mobile gaming platforms.

Going forward, it looks like the share price of Nintendo has bottomed out. There’s no place to go but up. Nintendo has a portfolio of iconic franchises – Mario, Donkey Kong, Zelda, Pokemon – and continues to roll out new iterations of them to new platforms, with spectacular success. The company’s new “Mario Kart 8 Deluxe” is a now a top-selling game, proof that even its oldest franchises have remarkable staying power.

Just about the only blip on the horizon concerns how the company is going to address the future of mobile gaming. There’s clearly a push into mobile gaming, but many of the real innovations in gaming – such as those involving virtual reality (VR) and augmented reality (AR) – require a powerful console. For now, the company’s stock price is highly correlated to the success of the new Switch – as sales of Switch skyrocket, so does the company’s price. That’s good news for investors, seeming to suggest that there’s a lot more upside ahead from this vaunted game maker. For more news on Nintendo Co., Ltd (ADR) and other fast-moving stocks, please subscribe to OracleDispatch.com below.