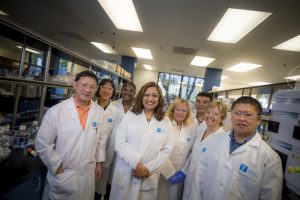 Currently, shares of PPHM are trading at $0.308. Over the most recent 52-week period, shares of PPHM have traded as low as $0.29 and as high as $1.20. What’s notable here is that the 52-week low was hit on November 4 of 2016, meaning that the company is showing signs of stabilizing off recent lows. Overall, PPHM has a market cap of $77.49 million. Institutional ownership of the stock is only 13 percent.

Peregrine Pharmaceuticals (NASDAQ:PPHM) is a California-based biopharmaceutical company that operates in two main segments – (1) cancer R&D and (2) commercial bio-manufacturing. Peregrine is the unit that controls all the R&D work for monoclonal antibodies for the treatment of cancer, including all studies related to Bavituximab. Avid is the unit that is responsible for providing contract manufacturing services for third-party customers on a fee-for-service basis.

Until March 2016, investors preferred to value Peregrine based on its cancer R&D efforts. They saw Bavituximab as the real future of the company. However, in March, Peregrine announce that it was discontinuing a trial of Bavituximab in patients with previously treated locally advanced or metastatic non-squamous non-small cell lung cancer (NSCLC). In short, a possible breakthrough treatment for a form of lung cancer was now in doubt. Peregrine tried to position this as a “setback,” but investors saw it as something far worse than that.

But now investor perception around Peregrine is starting to shift once again. Investors are taking a closer look at the company’s contract manufacturing operations, which are run out of its Avid Bioservices subsidiary. It turns out that the Avid unit is performing much better than anyone expected. In fact, based on strong revenue and net income trends coming out of Avid, the company now expects to be fully profitable within just 18 months.

Find out when $PPHM stock reaches critical levels. Subscribe to OracleDispatch.com Right Now by entering your Email in the box below.

The current thinking is that Peregrine might be undervalued based on its manufacturing operations alone. From that perspective, any products that come out of the cancer R&D unit are just a bonus. The current consensus price target for the stock is $1.25, which represents a steep gain from the current share price level of $0.30. This price target is very close to the 52-week high of $1.20 reached in early last year. Currently, one analyst has a “Strong Buy” on the stock, while five analysts have a “Strong Sell” on the stock.

There are a lot of positive financial factors that are currently lining up for Peregrine. The company posted strong quarterly results on December 12, beating analyst estimates for revenue and net income. The company now has strong growth in its Avid unit, with a projected break-even point in just 18 months. And the company is reporting progress on finding key biomarkers for Bavituximab, which will help the company understand how this potential cancer treatment works. In a best-case scenario, it means that there is still hope for all the Bavituximab R&D work to result in a drug candidate.

At a minimum, some analysts say the company is worth $1.00 a share. That valuation takes into account the Avid Bioservices unit, the future potential of Bavituximab, $49 million in cash, and no debt at the company. If that’s the case, then investors could be looking at a very bright 2017 after what has already been a very positive holiday season for Peregrine. For more news on Peregrine Pharmaceuticals and other fast-moving penny stocks, sign up for the Oracle Dispatch newsletter now.