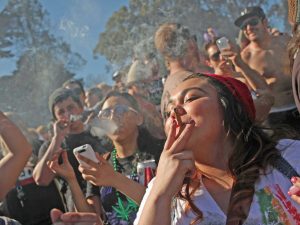 MassRoots Inc (OTCMKTS:MSRT) is a micro-cap player with a strong chart in the cannabis-related market segment. The company is a true marijuana users’ social network, with roots, stems, and buds branching out toward other business strategies. The stock has been holding up well during recent weakness in the space overall, and the pattern continues to suggest the potential for further upward action if the pieces continue to fall into place.

The company has been active on the wires of late, bolstering its case through a few recent press releases. Two, in particular, catch our eye. We will cover them momentarily. But first, we would note that the stock continues to hold well above the lows of its reactive correction following the November vote. That suggests the stock has a constructive narrative that continues to build without need of new legislative catalysts.

MassRoots Inc (OTCMKTS:MSRT) operates a technology platform for the cannabis community in the United States. The company’s mobile network enables users to share cannabis content to connect with the legalization movement. Its network is accessible as a free mobile application through the iOS App Store and the Google Play marketplace and as a Website at massroots.com.

The company also operates MassRoots.com/shop, an e-commerce platform that allows visitors to order MassRoots Inc T-shirts, jars, and stickers; and MassRoots for Business, a free online portal for dispensaries to schedule posts, view analytics, and gain insights into followers. MassRoots, Inc. was founded in 2013 and is headquartered in Denver, Colorado.

MSRT is one of the largest and most active technology platforms for cannabis consumers, businesses, and activists with over 1M registered users.

According to company materials, “MassRoots is one of the largest technology platforms for the regulated cannabis industry. The company’s mobile apps enable consumers to provide community-driven reviews of cannabis strains and products, enabling consumers to make educated cannabis purchasing decisions. MassRoots is proud to be affiliated with the leading businesses and organizations in the cannabis industry, including the ArcView Group and National Cannabis Industry Association.”

Find out when $MSRT stock reaches critical levels. Subscribe to OracleDispatch.com Right Now by entering your Email in the box below.

As for the company’s most recent catalysts, MSRT recently announced that it has now registered more than one million users on its platform. While this is impressive, it’s not really a “new catalyst”. It’s the type of thing a company puts out to generate investor enthusiasm. But it doesn’t necessarily function to introduce new second-derivative dimensionality to the story.

However, within the body of the release, we do actually learn something new: “In the coming days, we’ll be releasing a revamped website and updates to our mobile application that will significantly enhance our user experience and can be immediately deployed to our vast user base. With the 4/20 holiday season rapidly approaching, we’re preparing for a surge of web traffic, media coverage and user registrations that MassRoots has historically experienced this time of year. We look forward to continuing to expand our market share of cannabis consumers and dispensaries to further drive shareholder value.”

That was a quote from MassRoots Chairman and CEO, Mr. Isaac Dietrich. That’s significant, but even more so when one considers the content of the company’s next press release, which hit just two days later: MSRT just announced that it has revived its distribution access through the primary Android app platform, Google Play.

According to the release, MassRoots was unavailable on Google Play for roughly the past 4 months due to a compliance review.

“Re-gaining MassRoots’ listing on Google Play is a significant milestone that enables distribution to the millions of medical cannabis consumers that own Android devices,” stated MassRoots Chairman and CEO Mr. Isaac Dietrich. “MassRoots is already one of the most popular consumer platforms available, as evidenced by us recently announcing our 1 millionth registered user. I am confident that with this barrier to growth eliminated and several soon-to-be announced initiatives, we will be able to significantly leverage the 4/20 holiday season. We look forward to continuing to expand our market share of cannabis consumers and dispensaries to further drive shareholder value.”

Earning a current market cap value of $59M, MSRT has a chunk ($127K) of cash on the books, which compares with about $768K in total current liabilities.

MSRT is pulling in trailing 12-month revenues of $945K. In addition, the company is seeing major top line growth, with y/y quarterly revenues growing at 243.1%. With a sturdy technical profile, a growing user base, a revived distribution channel to Android users, and a new web presence coming together over the next month, this is an interesting play that seems likely to generate plenty of interest in coming weeks. We will update this one again as new information comes into view. For continuing coverage on shares of $MSRT stock, as well as our other hot stock picks, sign up for our free newsletter today and get our next hot stock pick!