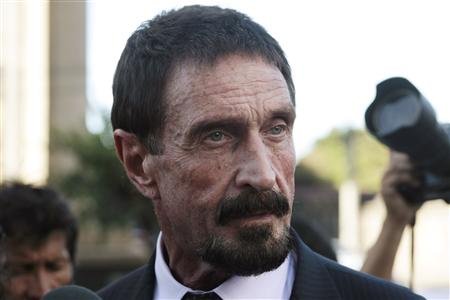 MGT Capital Investments Inc. (NYSEMKT:MGT) and the somewhat legendary, but controversial, figure of technology visionary John McAfee are back in the headlines. That’s actually welcome news for (NYSEMKT:MGT) shareholders. The company is preparing to change colors again and re-brand as John McAfee Global Technologies, Inc., and that’s leading to a lot of speculation about how much higher MGT might run. As of Oct. 14, shares of the company were already up 980% YTD, but the consensus appears to be that there’s still more upside before the end of 2016.

At a current share price of $2.53, MGT has a total market capitalization of $65 million. Over a 52-week period, shares of the company have traded as low as $0.15 and as high as $5.58. While MGT stock certainly comes with a bit of a speculative buzz around it, institutional owners already hold 21 percent of the stock, giving MGT stock a floor of support.

MGT Capital Investments Inc. (NYSEMKT:MGT) is a true chameleon on Wall St., as the company is reinventing itself yet once again. The New York-based company was previously in the business of acquiring, developing and monetizing assets in the online and mobile gaming space, including gaming assets within the social casino industry. As part of its gaming assets, the company operated Slot Champ, MGT Play and DraftDay Gaming (a fantasy sports operation).

Find out when $MGT stock hits critical levels. Subscribe to OracleDispatch.com Right Now by entering your Email in the box below.

That push into gaming and gaming-related intellectual property came after the company had started to develop a presence in the medical space, where it operates the MedicSight subsidiary. This company, among other things, is involved with medical imaging software to detect colorectal polyps. Oh, and MGT Capital Investments also designed an automated carbon dioxide insufflation device, from which it still receives royalties.

But now the company is the midst of a major transformation. It is acquiring the assets of D-Vasive, a cybersecurity firm owned by John McAfee. Yes, that’s the same John McAfee who’s now the subject of a new Showtime documentary film, “Gringo: The Dangerous Life of John McAfee.”

However, there are a few problems with the D-Vasive deal. The NYSE blocked the original plan of MGT to acquire the company by issuing and listing more common shares. So now MGT is executing a licensing/employment agreement, in which it gets the assets of the company and an employment deal with John McAfee. And not just any employee – McAfee will be the CEO of the company and will coordinate a re-branding of the company under his name.

However, given McAfee’s past, even that is not a simple matter, since the naming rights involving “McAfee” are now in doubt. When John McAfee sold his eponymous anti-virus company to Intel, the name was changed to Intel Security. But now Intel Security is selling the company to a private equity firm, TPG, which wants to re-brand it as McAfee and hold on to the naming rights.

For now, MGT is moving forward with the release of new cutting-edge cyber technologies that can protect companies from spyware, malware, and viruses. On October 14, the company just released the commercial launch of its network security product known as Sentinel.

The plan is to continue to release new cybersecurity products and either license or sell them under the McAfee name. And that’s not all – MGT is also acquiring the Demonsaw assets from D-Vasive, which would give it an anonymous file-sharing platform. Moreover, there’s talk of MGT getting into the highly speculative but also highly profitable field of Bitcoin mining.

So, obviously, there’s a lot happening at MGT, and that’s driving a lot of activity in the company’s stock. Getting the valuations right for all the new assets will be key. The first order of business is to straighten out the deal with D-Vasive and McAfee.

The second order of business is to address any legal or regulatory matters, such as a recent SEC subpoena related to a short squeeze in May. According to MGT, both the SEC and NYSE are coordinating actions to prevent the McAfee deal from happening as planned.

And the final order of business is to continue innovating and creating new products capable of driving bottom-line growth at MGT. If all that happens, we may be seeing yet another comeback and redemption story for John McAfee, one of the most controversial and legendary figures in the history of the technology sector. We will keep you updated with any critical developments. For continuing coverage on $MGT and our other fast moving picks, sign up for our free newsletter today and get our next hot stock pick!