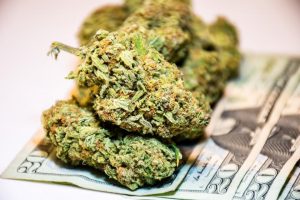 INMED PHARMACEUTIC COM NPV (OTCMKTS:IMLFF) is an interesting player in the MMJ space that we have covered on a few occasions. We generally think IMLFF is a promising story despite the fact that it has had its share of promotional action. One of the reasons for that sense is the company’s habit of innovation and focus on intellectual property. That concept was on display again this week, so we thought it was a good time for an update.
Specifically, the company just announced the filing of a provisional patent application pertaining to its proprietary biosynthesis program for the manufacture of cannabinoids that are identical to those found in nature. According to the release, “The patent application, once converted into an international Patent Cooperation Treaty (PCT) application and pursued in key jurisdictions throughout the world, will provide significant commercial protection for InMed’s E. coli-based expression system to manufacture any of the 90+ cannabinoid compounds that may have a medical impact on important human diseases.”
INMED PHARMACEUTIC COM NPV (OTCMKTS:IMLFF) casts itself as a biopharmaceutical company specializing in developing cannabis-based therapies through the Research and Development into the extensive pharmacology of cannabinoids coupled with innovative drug delivery systems.
IMLFF is utilizing its proprietary Intelligent Cannabinoid Drug Design Platform to identify new bioactive compounds within the cannabis plant that interact with certain gene targets responsible for specific diseases.
The big picture is that this is a pre-clinical stage biopharmaceutical company specializing in the research, development and commercialization of cannabinoid-based therapies to treat human diseases with high unmet medical needs. The Company has three core assets: a proprietary Bioinformatics assessment tool to match individual (or combination of) cannabinoids against disease targets; a proprietary Biosynthesis cannabinoid manufacturing system to economically produce all 90+ cannabinoids at pharmaceutical-grade (>99.5% purity); and drug development program enabled by the two aforementioned tools. Leaders in the pipeline include a treatment for the symptoms and, potentially, the underlying disease in Epidermolysis Bullosa, a rare, devastating genetic skin disorder; and, a once-a-day eyedrops formulation of cannabinoids to treat Glaucoma, one of the leading causes of blindness in the developed world.
According to company materials, “InMed is a pre-clinical stage biopharmaceutical company that specializes in developing novel therapies through the research and development into the extensive pharmacology of cannabinoids coupled with innovative drug delivery systems. InMed’s proprietary platform technology, product pipeline and accelerated development pathway are the fundamental value drivers of the company.”
Find out when $IMLFF reaches critical levels. Subscribe to OracleDispatch.com Right Now by entering your Email in the box below.

As noted above, the company just announced the filing of a provisional patent application pertaining to its proprietary biosynthesis program for the manufacture of cannabinoids that are identical to those found in nature. We said we liked the focus on innovation and intellectual property. So did the market. The stock leaped higher on this announcement, ramping nearly 30% higher in ensuing hours.
“This novel approach to the biosynthesis of cannabinoids is a game-changer for drug development. The importance of producing cannabinoids that are identical to the naturally occurring compounds cannot be overstated. Many drug development efforts with synthetic derivatives have failed,” said Dr. Vikramaditya Yadav, Assistant Professor of Chemical and Biological Engineering at University of British Columbia, a co-inventor of the biosynthesis technology.  “In our extensive experimentation, the E. coli system is more robust and more efficient for the manufacturing of cannabinoids as compared to other microbial platforms.”
Traders will note 64% tacked on to share pricing for the stock in the past month, a bounce that has taken root amid largely bearish action over the larger time frame. The situation may be worth watching. IMLFF has evidenced sudden upward volatility on many prior occasions. In addition, the company has witnessed a pop in interest, as transaction volume levels have recently pushed greater than 110% beyond what we have been seeing over the larger time frame.
At this time, carrying a capital value in the market of $44.7M, IMLFF has a significant war chest ($2.7M) of cash on the books, which must be weighed relative to virtually no total current liabilities. The company is pre-revenue at this point. You can bet we will update this one again as new information comes into view. Sign-up for continuing coverage on shares of $IMLFF stock, as well as other hot stock picks, get our free newsletter today and get our next breakout pick!
Disclosure: We hold no position in $IMLFF, either long or short, and we have not been compensated for this article.