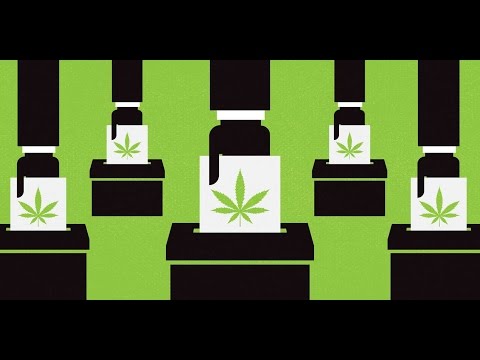 Cannabis stocks continue to soar, especially those that have a solid growth story behind them. That’s the case with Growblox Sciences (OTCMKTS: GBLX), which has been moving aggressively into medical cannabis cultivation and production. At the end of May, GBLX broke out of a trading range around $0.20, more than doubled in price to $0.45, then found a support level around $0.30.

Growblox Sciences Inc (OTCMKTS:GBLX) is currently trading at a price of $0.42, shares of Growblox Sciences could soon test 52 week highs once again. Over the most recent 52-week period, shares of GBLX have traded as low as $0.11 and as high as $0.45. The company currently has a stock market capitalization of $30M. Institutional owners control ~25 percent of the company’s outstanding stock.

The Solutions unit develops controlled-climate indoor agricultural technology for growing and cultivation, including its proprietary GrowBLOX suites (which includes TissueBLOX and CureBLOX). Its Sciences unit focuses on the pre-clinical testing of its biopharmaceutical product prototypes. And the Products unit focuses on bringing consumer-facing products to the marketplace.

Find out when GBLX stock reaches critical levels. Subscribe to OracleDispatch.com Right Now by entering your Email in the box below.

What has investors the most excited is that Growblox Sciences is now working on biotechnology R&D for pharmaceutical-grade cannabis-based therapies. Its Sciences unit is now working on testing cannabis-based product prototypes to begin future human clinical trials. The long-term plan to is to convert the cannabis plant into medicines, therapies and treatments for a wide range of different ailments.

Thus far, those plans appear to be paying off in a big way for GBLX. In late June, the company announced the grand opening of Showgrow, a medical marijuana dispensary in Las Vegas. The company also gained exclusive rights to Kushman’s cannabis brands, strains and genetics. Then, in early October, the company acquired two additional medical cannabis cultivation and production licenses in Nevada.

As part of these expanded cannabis cultivation plans, GBLX will look for ways to use the oils from the cannabis plant to create even more consumer-facing products, such as gel caps, edibles, beauty aids, cosmetics and extracts. This could be huge, because it will have a direct impact on the company’s margins. If GBLX can use the whole cannabis plant, and not just parts of it, then its entire cultivation and production operations will become more efficient.

The company’s new CEO has already talked up the company’s 28,000-square foot Teco cultivation facility in Las Vegas, where the first crop will start growing in October, and regular harvests will take place every 10 weeks. Right now, the plans call for using 200 grow lights to produce 110 pounds of cannabis per month. If Nevada legalizes marijuana for recreational use on November 8, the company could be well-positioned to benefit from the surging consumer demand for recreational marijuana in Vegas.

On top of that, the company is pushing hard into new medical uses for cannabis. On October 12, the company received a patent application for the treatments of Parkinson’s Disease, Alzheimer’s Disease, Huntington’s Disease and dementia. A subsidiary of Growblox called Growblox Life Sciences LLC will now develop novel approaches to creating cannabis-based therapies, including the use of complex cannabinoid-containing mixtures for the treatment of neurodegenerative diseases.

Thus, not only is Growblox Sciences ramping up its cannabis cultivation and production (which is going to get a huge push forward if California and other states legalize marijuana on November) – the company is also moving into the high-value-added area of advanced medicinal cannabis. A cannabis treatment for a major neurodegenerative disease like Parkinson’s or Alzheimer’s would be a truly billion-dollar market opportunity.

For investors, the big question could be whether to value GBLX as an indoor controlled-climate agriculture company, as a biotechnology company or as a biopharmaceutical company. One thing is clear, though: shares of GBLX stock are almost certain to be actively traded based on growing optimism about marijuana stocks and the future of the cannabis industry. For more information on Growblox Sciences and other fast-moving penny stocks, please subscribe to OracleDispatch.com now.