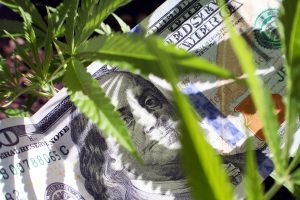 CANNABIX TECHNOLOG (OTCMKTS:BLOZF) is an increasingly interesting name in the cannabis-related segment on the OTC. The company is working on what could be a true breakthrough product as a marijuana breathalyzer. We have seen market participants react very positively as the company nails down IP issues. But the question of financing looms as a big one going forward. Hence all eyes will be on the stock after its announcement last week that it has entered into an agreement with Cormark Securities Inc. pursuant to which the Underwriter has agreed to purchase 3,000,000 units of the Company on a bought deal private placement basis at a price of $1.15 per Unit, for gross proceeds of $3.45 million.
This is a very important dynamic in shaping the future potential for this play. According to the release, each Unit shall consist of one common share of the Company and one common share purchase warrant. Each warrant will entitle the holder thereof to purchase one Common Share at a price equal to $1.60 for a period of 36 months following Closing.
CANNABIX TECHNOLOG (OTCMKTS:BLOZF) is developing its FAIMS- (field asymmetric waveform ion mobility spectrometry) based marijuana breathalyzer for the detection of delta-9-tetrahydrocannabinol in human breath.
Testing using the Cannabix Marijuana Breathalyzer Beta prototype device with human subjects after smoking THC cigarettes demonstrated the successful detection of THC, the psychoactive component of marijuana, in real-time. In addition to THC, several metabolites were identified in the breath of the human subjects including 11-hydroxy-delta-9-tetrahydrocannabinol and delta-9-carboxy-tetrahydrocannabinol, and three other cannabinoids related to cannabigerol, were confirmed by mass spectrometry after the inhalation of cannabis.
The ability to detect THC and its metabolites in human breath is a significant scientific breakthrough that allows for real-time pharmacokinetic analysis. Such analysis provides a method for the identification of frequent users of marijuana who tend to retain THC in their body for longer periods of time, relative to infrequent marijuana users who tend to clear THC from their body more quickly.
The Company plans further testing with its Beta and Beta 2.0 prototypes over the coming weeks. The Company will be calibrating decay signal intensities with a refined breath collection component.
According to company materials, “Cannabix Technologies Inc. is a leader in marijuana breathalyzer development for law enforcement and the workplace. Cannabix has established breath testing technologies in the pursuit of bringing durable, portable hand-held tools to market to enhance detection of marijuana-impaired driving offenses on roads at a time when marijuana is becoming legal in many global jurisdictions. Cannabix is working to develop drug-testing devices that will detect THC- the psychoactive component of marijuana that causes intoxication- using breath samples. In particular, Cannabix is focused on developing breath testing devices for detection of recent use of THC, in contrast to urine testing for THC metabolite that requires an invasive collection and reflects use days or even weeks earlier. The devices will also be useful for other practical applications such as testing employees in the workplace where intoxication by THC can be hazardous.”
Find out when $BLOZF stock reaches critical levels. Subscribe to OracleDispatch.com Right Now by entering your Email in the box below.

According to the company’s release, “the Company has granted the Underwriter an option to purchase up to an additional 15% of the Offering at the Offering Price exercisable, in whole or in part, at any time up the closing of the Offering. The Offering is scheduled to close on December 7, 2017, and is subject to certain conditions including, but not limited to, the receipt of all necessary approvals including the approval of the Canadian Securities Exchange. The Company intends to use the funds for research and development purposes related to its cannabis breathalyzer technologies, working capital and general corporate purposes.”
Traders will note in excess of 120% added to share values of the company over the past month of action. The situation may be worth watching. BLOZF has a track record that includes a number of dramatic bounces. In addition, the name has witnessed a pop in interest, as transaction volume levels have recently pushed nearly 1100% above its longer-run average levels.
Earning a current market cap value of $92.5M, BLOZF has a reserve ($2.1M) of cash on the books, which must be weighed relative to virtually no total current liabilities. The company is pre-revenue at this point. You can bet we will update this one again as new information comes into view. Sign-up for continuing coverage on shares of $BLOZF stock, as well as other hot stock picks, get our free newsletter today and get our next breakout pick!
Disclosure: we hold no position in $BLOZF, either long or short, and we have not been compensated for this article.