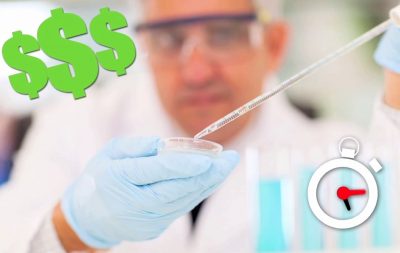 Encompass Compliance Corp (OTCMKTS:ENCC) is a micro-cap stock that has grabbed hold of the attention of traders during the stock’s recent bounce. The most obvious catalyst for the increased attention and lift in the stock is likely the company’s recent announcement that it has been selected by one of the largest drug testing laboratories to provide real time industry updates and Risk Shield Services to their respective customers.

According to the release, the official announcement will be made at DATIA May 16-18th. We have a sneaking suspicion that there may be some other forces involved in the stock’s movement right now, but it is still strong movement, nonetheless. In all, we’ve witnessed about 82% piled on for shareholders of the company during the trailing week, a rally that has pushed up against longer standing distributive pressure in the stock. In addition, the listing has benefitted from a jump in recent trading volume to the tune of greater than 470% beyond its prior sustained average level.

Encompass Compliance Corp (OTCMKTS:ENCC) trumpets itself as a company that focuses on employer cost reductions by providing SaaS subscription compliance services to fortune 500 customers as well as a variety of the smaller 23 million employers in the U.S., across many business verticals.

These services provide employers with the content and tools to assess, develop, maintain and keep current the vast and complicated state-specific drug and alcohol testing policies and procedures which are governed by state and federal law, court decisions and statutes.

Employers use these services to maintain their drug test compliance programs, defeat Workers Compensation claims that involve drugs and alcohol and assist with operational efficiencies such as, avoiding wrongful termination, ADA violations, improper drug test violations, applying the evolving rules of Marijuana testing and termination, all with a clear focus on workplace compliance and safety.

Subscribe below and we’ll keep you on top of what’s happening before $ENCC stock makes its next move.

As noted above, we’ve seen a recent sharp bounce in shares of ENCC that correlate in timing with the company’s recent announcement that it has been selected by a large lab for “real time industry updates and Risk Shield Services to their respective customers.”

The identity of the Lab was not revealed. One assumes that will be part of the suspense alleviated when the company makes its official announcement at the DATIA conference on May 16-18th. The Drug and Alcohol Testing Industry Association (DATIA) was founded in 1995 and has grown to represent over 1,500 member companies. DATIA now represents the entire spectrum of drug and alcohol service providers including collection sites, laboratories, consortiums/TPAs, MROs, and testing equipment manufacturers.

The Lab partner in question, according to information in the release, provides products and services to over 200,000 companies.

I have to say, the company is certainly milking this deal quite nicely. The strategy of putting out a press release with the partner – known only as “one of the largest Labs” – is quite sharp. The actual announcement at DATIA then becomes a focus and one can actually make a case for an anticipatory run in shares into the announcement just in case it ends up being Quest or Labcorp (which is probably unlikely, but who knows). The strategy may end up backfiring in the end if the market is ultimately let down, but the whole process may be good for a trade.

“Our offerings allow employers to properly follow state laws as they change and utilize our Risk Shield Service to update and maintain their compliance programs, for drug and alcohol testing in the workplace.” says Encompass CEO Richard Sharp

At this time, carrying a capital value in the market of $2.54M, ENCC has very little cash on the books, which must be weighed relative to about $169K in total current liabilities. ENCC is pulling in trailing 12-month revenues of $407K. However, the company is seeing recent declines on the top line on a sequential quarterly basis, with revenues falling at -38.9% as of its latest reporting period. This is an exciting story, and we look forward to a follow-up chapter as events transpire. For continuing coverage on shares of $ENCC stock, as well as our other hot stock picks, sign up for our free newsletter today and get our next hot stock pick!