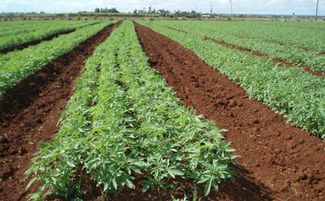 Hemp Inc (OTCMKTS:HEMP) has been performing reasonably well during the recent run higher by cannabis-related stocks. However, it has not seen anywhere near the attention as have other stocks related to the space. This is for two reasons: First off, the company has been bathed in the light of scandal since its CEO, Bruce Perlowin, was arrested on fraud charges earlier this year, and second, because it is not really a part of the game that is involved in the voting on November 8, at this time, being merely a player in the industrial hemp space.

That said, there seems to be some correlation in trading with HEMP and the “pot stocks”, even though their end markets are entirely unrelated. HEMP began as a medical marijuana company. However, at this point, it appears to be solely tied to industrial hemp. Traders will note 45% tacked on to share pricing for the name in the past month, but that move comes in the context of a larger bearish trend. The situation may be worth watching. HEMP has evidenced sudden upward volatility on many prior occasions. In addition, the listing has witnessed a pop in interest, as transaction volume levels have recently pushed greater than 260% beyond its prior sustained average level.

The company was formerly known as Marijuana, Inc. and changed its name to Hemp, Inc. in June 2012. Hemp Inc. was founded in 2008 and is headquartered in Las Vegas, Nevada.

Find out when $HEMP stock reaches critical levels. Subscribe to OracleDispatch.com Right Now by entering your Email in the box below.

Recent commentary from the company’s notorious CEO puts much in perspective:

“The resurgence of industrial hemp in America has been sweeping the nation. For decades, public opinions surrounding this controversial crop have vacillated between those few who still vilify it (now in very rare cases) and those now bipartisan, almost unanimously who advocate it. While the economic benefits continue to hold strong, industrial hemp has run the proverbial gauntlet in America as a result of many political factors, special interests, and just plain ignorance and lack of education. However, just in the last month or two alone, we’ve seen more state-enacted laws, formal debates, and more political support for industrial hemp.

“Industrial hemp is the non-psychoactive relative of marijuana that contains less than 1% THC. But for a myriad of moronic reasons, industrial hemp is currently less likely to be cultivated in the United States. Both hemp and marijuana originate from the same cannabis species, but are genetically distinct. Further distinctions are distinguished by use, chemical makeup, and cultivation methods. Hemp, Inc. ( OTC PINK : HEMP ) CEO, Perlowin, said, “While Hemp, Inc. keeps its focus on industrial hemp, we continue to stay abreast of the cannabis sector. More states are voting in favor of cannabis as they are hemp. With an unprecedented nine states to have marijuana initiatives included, five of those nine states (California, Nevada, Arizona, Maine, and Massachusetts) are voting on whether to legalize recreational use of marijuana. A yes vote on California’s ballot initiative, referred to as the ‘Adult Use of Marijuana Act’, favors legalizing not just marijuana but hemp also.”

As we have noted in the past, there are a couple things to take into account with this stock that prospective investors must overcome in their interest. The first thing to point out is the 40% increase in outstanding shares between March and June of 2016 according to annual reports. The second is the action during early trading hours on Wednesday, June 22, 2016, after the SEC announced charges against Hemp’s CEO, Bruce Perlowin the day before. Perlowin was allegedly running a long-standing fraudulent scheme that involved selling hundreds of millions of the Company’s shares that were unregistered and not properly filed with the SEC.

Now commanding a market cap of $30.7M, HEMP has almost no cash on the books, in a pool of total assets just shy of $6.8M, which compares with very little total accumulated debt. The lack of debt is somewhat surprising here. And the total asset value suggests this company would benefit from a change at the top.

The bottom line is, with a new CEO, lines of credit would likely create potential for diversification and co-product development into other areas of the cannabis space that may generate a higher ROI. We will check back on Hemp Inc soon to update the story. For continuing coverage on shares of $HEMP stock, as well as our other hot stock picks, sign up for our free newsletter today and get our next hot stock pick!