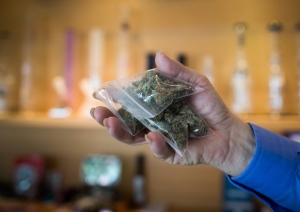 CANOPY GROWTH CORP COM NPV (OTCMKTS:TWMJF) has been ripping higher boosted by multiple catalysts related to the overall picture for cannabis-related stocks and legislative issues in North America. The company has also been a leader in the marijuana marketplace. In fact, given the space used for production, the company is the largest marijuana producer in the entire world, according to our research.

As we noted in our last piece, we like this story. We pointed it out as a major long-term growth story, and the stock has since responded, jumping as much as 180% since we put out that piece back in late October. Overall, recent action has seen 76% tacked on to share pricing for the company in the past month. Market participants may want to pay attention to this stock. Shares have registered increased average transaction volume recently, with the past month seeing just shy of 450% above the average volume levels in play in this stock over the longer term.

CANOPY GROWTH CORP COM NPV (OTCMKTS:TWMJF) bills itself as a company that, through its subsidiaries, produces and sells medical marijuana in Canada.

The company offers dry cannabis and oil products primarily under the Tweed and Bedrocan brands. It also sells its products through online.

The company was formerly known as Tweed Marijuana Inc. and changed its name to Canopy Growth Corporation in September 2015. The company is headquartered in Smiths Falls, Canada.

Find out when $TWMJF stock reaches critical levels. Subscribe to OracleDispatch.com Right Now by entering your Email in the box below.

Both the anticipation and outcome of the very significant US vote on weed legalization that took place across nine states on November 8 (last Tuesday) was a major driver the whole cannabis space. And, clearly, with exposure to that space, OTCMKTS:TWMJF is another stock that greatly benefited from the action.

As the reader no doubt is aware, the voting went well, with 8 of 9 states moving forward on the legislative path toward greater legal sales. Industry analysts have posted expectations of somewhere on the order of a 3-4x growth in legal sales footprint in the US as a result. However, the Canadian cannabis story may even be hotter right now than the US one, and in fact may provide a model for what we will eventually see here in the states.

In Canada, legislation is likely to be on the table sometime next year to fully legalize pot on a national basis for all conceivable consumers, according to a promise made by the country’s PM Trudeau.

According to recent Forbes article, “Canada has an established national medical marijuana program within Health Canada that is well respected by many other countries and looked up to as a model to follow. The program is still making adjustments and improvements as it matures and determines what is and isn’t working. Now the country is tasked with figuring out how to legalize recreational marijuana. A task force was established and has been given the job to figure out to to deliver Prime Minister Trudeau’s legalization promise. The expectation is that recreational marijuana will happen sometime in 2017.”

Susan Boyd, a professor at the University of Victoria and a member of the task force. “The big question is what’s next,” she said. “Certain myths are quite enduring, They become moral issues and so it doesn’t matter about the evidence or our research conclusions.”

Currently trading at a market capitalization of $987M, TWMJF has a significant war chest ($14.48M) of cash on the books, along with total assets just shy of $63M, which stands against an appreciable load ($3.06M) of total accumulated debt. So, the balance sheet is in stellar condition. But there’s more good news: TWMJF is making real money, with trailing revs already coming in at $13.33M. In addition, the company is starting to see major topline growth, with quarterly y/y revs increasing at 308%. With big catalysts lined up out into the future, there’s a ton to continue to like here, and we will be avid followers of the story. For continuing coverage on $OTCMKTS:TWMJF stock and our other hot stock picks, sign up for our free newsletter now and get our next hot stock pick!