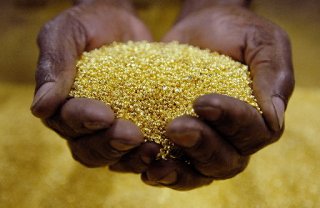 Currently, shares of Gold Fields Limited are trading at $3.67, giving the company a stock market capitalization of $2.86 billion. Over the most recent 52-week period, shares have traded as low as $2.60 and as high as $6.60. That high was reached back in mid-August. Since, then, there’s been a bit of turbulence for Gold Fields Limited.

Don’t blame Gold Fields Limited (ADR) (NYSE:GFI), though, blame the global economy – and especially commodity prices. The fortunes of GFI are heavily dependent on the price of gold, and the price of gold, in turn, is heavily dependent on what’s happening in the U.S. economy. In general, any good U.S. economic data raises the prospect of Fed rate hikes, and that’s bad news for gold stocks.

Find out when $GFI stock reaches critical levels. Subscribe to OracleDispatch.com Right Now by entering your Email in the box below.

So, part of the optimism surrounding GFI in 2017 has to do with investor perceptions of what the Fed is going to do over the next 12 months and how the U.S economy is going to perform under the new Trump administration. As a result, price targets for Gold Fields Limited are all over the place.

The consensus price target for the stock ranges from $2.60 to $6.94. You can think of $2.60 as the floor, because that’s the 52-week low the company hit back on December 15th. In the same way, $6.94 represents only a modest increase of where the stock stood back on August 11th ($6.60). In other words, Wall Street analysts really aren’t giving any clear guidance here – all they’re saying is that the real value of the stock is somewhere in between the level it reached from August to December 2016.

That uncertainty shows up in the way the big Wall Street analysts have been upgrading and downgrading the stock, seemingly contradicting each other with every new rating. On December 12, for example, the Royal Bank of Canada downgraded GFI from “Outperform” to “Sector Perform.” Then, on March 3, JP Morgan Chase upgraded the stock from “Neutral” to “Overweight.” But just a week later, on March 11, Goldman Sachs lowered its rating to “Hold” on the stock. And on March 13, HSBC Holdings upgraded GFI from “Reduce” to “Hold.” So every downgrade has been followed by an upgrade – and vice versa.

Better guidance about what’s going to happen next with Gold Fields Limited comes from the options market. Back in November 2016, there was a spike in activity around the January 2017 GFI call options with a strike price of $3.00. At the time, that was a bullish signal because GFI was trading right around $3 per share. But, one month later, investor attention turned to the April 2017 GFI call options with a strike price of $3.00. At that time, GFI was trading around $2.65 per share. So keep your eyes on the options market, especially for any signs of a change in the put/call volume ratio for the $3 strike price.

Gold Fields reported its financial results for the year ended December 31, 2016 on February 16. At that time, the company’s CEO noted that production levels and costs were beating original guidance. Moreover, the CEO pointed out that GFI was generating strong cash flow, deleveraging its balance sheet, and growing the dividend (albeit modestly, from $0.039 to $0.04).

In terms of its core gold production activities, GFI owns 8 producing mines in South Africa (South Deep), Ghana, Australia and Peru. The company is involved in underground and surface gold and copper mining and related activities, including exploration, development, extraction, processing and smelting.

By investing in Gold Fields Limited, you’re getting direct exposure to gold and commodity prices. If you have the conviction that Gold Fields will continue to be a global leader in gold mining and that the Fed is not ready to hike rates again anytime soon, then now might be the time to get in on a major gold stock that has room to run. For more news on Gold Fields Limited (ADR) and other fast-moving penny stocks, please subscribe to OracleDispatch.com below.