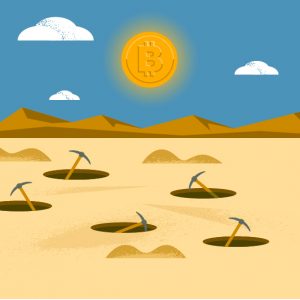 BITCOIN SERVICES I COM USD0.001 (OTCMKTS:BTSC) is another play picked up by OTC traders as pin action on the explosive and parabolic advance this week in the value of bitcoins as a traded currency. We noted in a piece yesterday that the Consensus conference was underway and that several announcements had already hit including Fidelity’s deep backing of the digital currency and a Japanese airline that had announced it would accept bitcoin payments. It appears as though the concept embodied by bitcoin is starting to turn a corner as far as widespread public acceptance is concerned.

But the biggest announcement came on Tuesday evening when the Digital Currency Group sent out word that it would support parallel upgrades to bitcoin that forestall a fracturing of the currency to deal with its scaling conundrum. It may also have been pushed by Moody’s first downgrade of Chinese debt in over 28 years. China imposed capital controls keep wealthy Chinese citizens from moving their money out into other global currencies. However, they do have access to bitcoin, which may now be receiving increased attention following the credit downgrade.

BITCOIN SERVICES I COM USD0.001 (OTCMKTS:BTSC) bills itself as a company engaged in the mining of Bitcoin as well as Blockchain software development. Bitcoin mining is the process by which transactions are verified and added to the public ledger, known as the block chain, and also the means through which new Bitcoins are released.

According to company press materials, “Our business operations are Internet based to the consumer and consist of two separate streams, as follows: (1) bitcoin mining, and (2) blockchain software development. The principal products and services are the mining of bitcoins, and the development and sale of blockchain software. The market for these services and products is worldwide, and sold and marketed on the Internet.”

In the company’s most recent press release, BTSC announced that it began mining Monero in the 1st quarter of 2017.

According to the release, “Monero is currently one of the top digital currencies with a market cap of over 300 mil USD. The Company is pleased to announce their earnings on May 12, 2017, and a launch of a new website in the upcoming weeks. In addition, Bitcoin Services Inc. has begun developing a new Crypto currency wallet that will let users safely store multiple digital currencies in one wallet. Bitcoin Services Inc. would also like to congratulate all Bitcoin users for reaching a historic all time high on April 2nd of 2017.”

In the company’s prior press out in January, the theme was expansion: the company announced “that it purchased four Antminer S9 bitcoin miners. The S9 has more hashing power than any previous device crammed into its silicon; a massive 14 TH/s (TeraHash per second). A total of 189 chips, spread over 3 circuit boards, are combined to achieve this phenomenal hashrate. In addition, after several shareholder inquiries, the company has no plans for a reverse split. The current share structure as of today is 511,784,705 OS, 387,512,190 Restricted, and 124,272,515 Float.”

As for the action in BTSC, it has certainly been explosive. Recent action has seen 86% tacked on to share pricing for the company in the past week. The situation may be worth watching. BTSC has a track record that includes a number of dramatic bounces. What’s more, the listing has registered increased average transaction volume recently, with the past month seeing 99% beyond what we have been seeing over the larger time frame.

Now commanding a market cap of $29.4M, BTSC has about $71K in cash on the books, which compares with roughly $117K total current liabilities. The company has booked about $101K in trailing 12-month revenues, but the top line fell off to flat in the company’s most recently reported quarter, which was the quarter ended September 30, 2016. This may be a very interesting story and we will look forward to updating it again soon. For continuing coverage on shares of $BTSC stock, as well as our other hot stock picks, sign up for our free newsletter today and get our next hot stock pick!