Bitcoin Investment Trust (OTCMKTS:GBTC) May Not Be in a Bubble After All 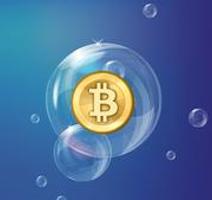 Bitcoin Investment Trust (OTCMKTS:GBTC) is in an interesting position right now in the market, as are all things associated with the Bitcoin phenomenon. In all my years involved in markets, I have never seen something so clearly believed to be in an extant bubble. In other words, while there are bubbles, and everyone knows that such and such was a bubble, it is very rare for something to be seen as in a bubble before it bursts. In fact – and this is the key insight – big and sustained trends are often misperceived as bubbles in their early stages.
So, if everyone is so certain that cryptocurrencies are in a bubble right now, how might we go about assessing that implied question? I would say this is the most important question to ask in making this judgment call: How many of your next door neighbors, friends, and family currently own any substantial exposure to a cryptocurrency? For me, I actually recently asked several of my neighbors and friends, and I know the answer where my family is concerned. And can you guess what percentage of them own any exposure to this asset class? I’m guessing once you thought about it, it was easy: zero. I’m also guessing you now probably realize that none of your friends, family, or neighbors own a single penny of cryptocurrency exposure. And that suggests to me very convincingly that this trend is still in the early innings.
Bitcoin Investment Trust (OTCMKTS:GBTC) bills itself as a private, open-ended trust that is invested exclusively in bitcoin and derives its value solely from the price of bitcoin. It enables investors to gain exposure to the price movement of bitcoin without the challenge of buying, storing, and safekeeping bitcoins.
The BIT’s sponsor is Grayscale Investments, a wholly-owned subsidiary of Digital Currency Group.
Each BIT share represented ownership of 0.1 bitcoins initially. The trust will not generate any income and regularly sells/distributes bitcoins to pay for its ongoing expenses. Therefore, the amount of bitcoin represented by each share gradually declines over time.
Find out when $GBTC stock reaches critical levels. Subscribe to OracleDispatch.com Right Now by entering your Email in the box below.

As discussed above, the concept of “a bubble” has been constantly tagged to cryptocurrencies over the last few months because their rise in value has been astronomical. But when it comes to breadth of exposure, the move has been driven by a very small slice of the investor class; namely early adopters and so-called smart money. We have yet to see any real adoption by the mainstream investing public, which suggests this phenomenon is still in its early stages.
The classic form of a bubble is said to have 3 main phases: stealth, discovery, and mania. Those precede the classic bust phase, which is the inevitable final stage for anything that reaches a mania phase.
In this case, one can be sure that we are no longer in the stealth phase. If you search for “Bitcoin”, the imagery will likely hit your screen of a yacht, some pretty women, a stack of gold or bills, perhaps a mansion. This is very much a hot financial idea right now. But we are also likely not yet in the mania phase because such a small percentage of investors are involved at all. It is still in the process of reaching a wider audience, so to speak.
That suggests the current trend is in the discovery phase. And that makes sense. Right now, people have heard of bitcoin, blockchain, cryptocurrencies, and other buzz terms, but don’t really understand what the point is, or how they even work. That means the next phase will be navigated by how successfully the early adopters are at educating the masses. Nothing is guaranteed here, but the upside potential if this goes mainstream is very difficult to pin to a number. Because we are talking about currencies here, there is no means of assigning valuation. A bitcoin makes sense at $0.02/coin just as much as it makes sense at $200,000/coin. The numbers are entirely arbitrary. And it will be important to keep that in mind.
Traditional Wall Streeters will likely have the most trouble with this concept of anything here. There is very little else that is quite so arbitrary in its pricing. And most analysts are instinctively driven to assign some kind of sense of a valuation standard that grants a framework for perceiving price changes as either rational or irrational. In this case, however, that may never work well as an interpretive mindset. This may be another reason why this phenomenon can ultimately reach a whole new level of insanity at some point.
Recent action has seen 21% tacked on to share pricing for GBTC in the past month. The situation may be worth watching as this instrument has certainly evidenced sudden upward volatility on many prior occasions. Furthermore, the name has seen an influx in interest of late, with the stock’s recent average trading volume running 17% above its long run average levels. This should not be overlooked due to the extremely small float size in the stock (of 1.4M shares). Traders should not overlook this combination, as with such a tight trading float, this kind of ramping interest can force a supply-shock squeeze. For continuing coverage on shares of $GBTC stock, as well as our other hot stock picks, sign up for our free newsletter today and get our next breakout pick!
Disclosure: we hold no position in $GBTC, either long or short, and we have not been compensated for this article.