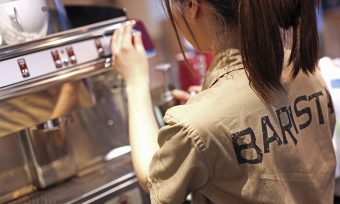 BARISTAS COFFEE CO COM USD0.001 (OTCMKTS:BCCI): A New Coffee Brand With a Potent Brew. When it comes to evaluating the future prospects of Seattle-based Baristas Coffee Co Com USD0.001 (OTCMKTS: BCCI), it can be difficult to separate the reality from the hype. Baristas Coffee, which bills itself as “Seattle’s World Famous Costume Coffee,” has shown itself to be absolutely masterful in promoting its brand and building buzz. And now a new national advertising campaign is building even more hype around this Seattle-based coffee company.

The reason for this massive upsurge in activity around Baristas Coffee has to do with the launch of a new, multi-platform advertising campaign designed to raise consumer awareness of the Baristas Coffee brand – and especially its White Coffee product, which has become the company’s flagship product. White Coffee has a unique roasting process that is slower and involves lower heat, and that leads to a lighter-colored coffee that contains 3 times the caffeine of regular coffee.

The big breakthrough for BCCI was getting its coffee listed on Amazon.com. According to Baristas, Amazon just placed its “largest order ever” for White Coffee single serve cups. These single serve cups are compatible with Keurig K-Cup brewing systems, including Keurig 2.0 systems. As Baristas notes, this order is 300% larger than any previous order placed by Amazon for its coffee.

On the surface, of course, this sounds like tremendous news. Getting your product picked up by the world’s largest online retailer is obviously a big deal. But if you actually check out the company’s product listing on Amazon, it doesn’t seem quite as impressive. Baristas is selling a single product – “Pacific Northwest style white coffee” – for a total price of $13.50. That includes a 12-count of single-serve coffee cups for Keurig brewing systems.

Subscribe below and we’ll keep you on top of what’s happening before $BCCI stock makes its next move.

For now, the Baristas strategy involves a splashy advertising campaign. For example, the company is running a Spotify ad campaign featuring music star Megs McLean that has the potential to reach 100 million active listeners on Spotify. The company hopes that young, Millennial listeners will help to spark a “white coffee craze.”

The company is also running a traditional ad campaign on 120 radio stations nationwide. At the same time, the company is running “special product highlight spots” on CNBC’s “Shark Tank” that could reach 35 million households during prime time. “Shark Tank” has shown a real ability to lift sales for emerging products, and that promotion could be a bit of genius advertising.

The real risk of a “as seen on TV” platform, however, is that it seems a bit gimmicky. As noted on Yahoo Finance, BCCI had to raise $2 million in external financing just to come up with the funding for this advertising campaign, which is why it somehow feels like a “bet the company” approach to getting nationwide exposure for the brand. Can the company really sell enough $13.50 coffee orders on Amazon to make it all pay off? $2 million may not sound like a lot of money for an advertising campaign – but keep in mind, the total market capitalization of the company is $2 million!

Certainly, BCCI is no stranger to marketing hype. The fundamental premise of the company is that it is a “costume-themed drive thru coffee chain.” What that means in reality is that the chain is as much Hooter’s as it is Starbucks. A WE TV special, called “Grounded in Seattle,” featured the women who work at Baristas Coffee, and it certainly gave a much better idea of what the chain is all about. The show featured young, very attractive women from troubled homes and difficult life situations who are now dressing up in very sexy costumes and pouring coffee in a drive-thru. This video is now the featured video on the Baristas YouTube page.

On its website, BCCI touts its “gourmet coffee,” its “fun costumes,” its “amazing customer experience” and its “artisan baristas.” That’s a great basis for establishing a popular brand, but is that enough to lead to higher sales on Amazon? There’s a reason why the market cap of the company only recently broke through the $1 million mark – there are a lot of question marks surrounding this company. Yet, if “white coffee” becomes a national craze, it’s easy to see how Baristas could get a major lift, at least in the short term. For more news on Baristas Coffee and other breakout stocks, please subscribe to OracleDispatch.com below.