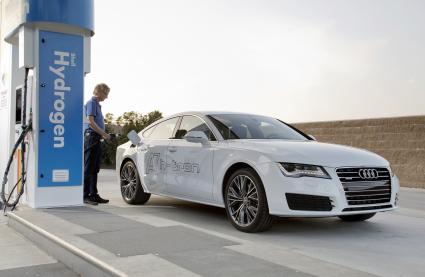 Ballard Power Systems Inc. (USA) (NASDAQ:BLDP) has been advancing nicely, boosted by reports that the Company’s first Ballard-powered buses are hitting the road in China. There are 12 buses in all heading out into operation in Guangdong in what will be a defining moment for the Company’s global footprint and legitimacy as a player in the Chinese market.

However, traders should note this is not a fly-by-night operation. BLDP is making real money, with trailing revs already coming in at $69.97M, and displaying major topline growth, with quarterly y/y revs increasing at 58% as of the Company’s Q2 filing in July. That growth already reflects the Chinese contract, so the real question here is about what lies ahead.

Ballard Power Systems Inc. (USA) (NASDAQ:BLDP) trumpets itself as a company that engages in the development and commercialization of proton exchange membrane fuel cells worldwide. It is primarily involved in the design, development, manufacture, sale, and service of fuel cell stacks, modules, and systems for various applications.

Ballard Power Systems Inc. offers its fuel cell products for various applications, including portable power, material handling, and telecom backup power, as well as power product markets of bus and tram applications. The company has a strategic alliance with Zhongshan Broad-Ocean Motor Company Limited to produce fuel cell modules for use in buses and commercial vehicles in various cities and regions in China.

Ballard Power Systems Inc. was founded in 1979 and is headquartered in Burnaby, Canada.

Find out when $BLDP reaches critical levels. Subscribe to OracleDispatch.com Right Now by entering your Email in the box below.

As noted above, BLDP shares have been strong of late. In fact, this is something of an understatement. Since late July and Company’s Q2 report, the stock has nearly doubled. For a company already worth over $200 Mln coming into that stretch, this is no small feat.

The report was strong, showing a quickly expanding top line. As noted, the key impetus for the growth was the order flow coming from China. But since then, the action in the stock may also be tied to a string of positive announcements.

The Company made two key announcements on August 18.

First, it announced it had signed a Distribution Agreement with Toyota Tsusho Corporation, a member Company of the Toyota Group. Under the agreement, TTC will act as a distributor of Ballard-powered fuel cell products in Japan. The initial term of the agreement runs to December 31, 2020.

Randy MacEwen, Ballard President and CEO said, “This agreement with Toyota Tsusho Corporation represents an exciting development for Ballard and important progress in the execution of our strategy in Japan. Toyota Tsusho is a large-scale player in Japan and around the globe, with interests in diverse areas and access to the tremendous network of Toyota Group Companies across a wide range of end-markets.”

The Broad-Ocean investment, “initially announced in a press release on July 26, 2016, has been made through a subscription and purchase of 17,250,000 common shares issued from treasury at a price per share of US$1.64 (based on a 20-day volume weighted average price calculation). The investment represents approximately 9.9% of Ballard’s outstanding common shares following the transaction.”

That leads nicely to the Company’s headline flow in late September. First, the Company announced that automotive OEM Audi AG has issued purchase orders to Ballard to accelerate certain key development activities under the current long-term Technology Solutions program that Volkswagen Group has with Ballard. We first learned about this back in February of 2015. The gist here is a $112 mln deal for BLDP wherein Volkswagen will be using Ballard’s technology to develop its fuel cell program across a six-year span.

However, as noted right at the outset, the most impactful announcement just days later was news that the company had put 12 electric buses on the roads in Guangdong, China as the first installment of a planned deployment of 300 total buses.

Taken together, the narrative is firmly one of sustained growth with a multiplicity of catalysts and an expanding global footprint.

Now commanding a market cap of $415.6M, BLDP has a significant war chest ($41.30M) of cash on the books, which stands against an appreciable load ($8.16M) of total accumulated debt. With crude oil prices advancing back above the $50/bbl level in recent trade, demand for energy efficient transportation will continue to rise. BLDP has heterogenous functional redundancy in its future potential revenue sources at this point and an already growing top line. But investors should consider whether or not momentum will continue in share prices after an already remarkable advance in recent months. For continuing coverage on $BLDP and our other hot stock picks, sign up for our free newsletter today and get our next hot stock pick!