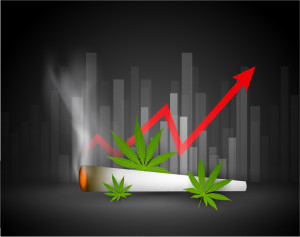 AGRITEK HLDGS INC COM USD0.0001 (OTCMKTS:AGTK) is a penny play in the marijuana space that has been struggling to join others in the space in a year-end dash. The stock has shown a bit of strength in recent days, but trails its peers despite the company’s announcement that it has completed the filing of its quarterly reports and has returned to fully reporting and compliant trading status. Based on the Company’s strategic plans for growth in the state of California and new offices in Puerto Rico, the Company also made clear in its recent press release that it will seek to uplist to a higher exchange after the New Year based on the new legalization initiatives passing in multiple jurisdictions.

According to the press release, “This legalization explosion is best explained by the changing tide in public opinion toward marijuana. National pollster Gallup found that support for marijuana’s legalization is at a new all-time high of 60% in 2016 (up from 25% in the mid-1990s). An additional 84% of surveyed Americans would like to see medical cannabis legalized nationally, according to a CBS News poll in 2015. The more favorable the public’s opinion toward marijuana, and the more states are able to demonstrate that they can safely and effectively regulate their pot industry, the greater the likelihood that other states will legalize as well.”

AGRITEK HLDGS INC COM USD0.0001 (OTCMKTS:AGTK) trumpets itself as a company that offers various products and services to the medicinal marijuana sector in the United States. It distributes hemp-based nutritional products; and provides solutions for electronically processing merchant transactions.

The company is also involved in the acquisition and leasing of real estate properties, such as cultivation space and related facilities to licensed marijuana growers and dispensary owners. In addition, it offers consulting services, including obtaining licenses, compliance, cultivation, logistical support, facility design, and building services to the cannabis industry.

Moreover, AGTK considers itself a pioneer within the medicinal marijuana space, provides innovative patient technology and agricultural solutions within the Compassionate Care Technology for the recreational cannabis industry. Agritek Holdings, Inc. does not directly grow, harvest, or distribute or sell cannabis or any substances that violate or contravene United States law or the Controlled Substances Act, nor does it intend to do so in the future.

Find out when $AGTK stock reaches critical levels. Subscribe to OracleDispatch.com Right Now by entering your Email in the box below.

The company is determined to play to investors, perhaps rightly, on the strength of the fundamental legislative momentum now inherent in the cannabis-related space in North America. To this end, management cites investment firm Cowen & Co. in its belief that legal marijuana sales could soar from $6 billion today to $50 billion by 2026. That’s a compound annual growth rate of nearly 24% over the next decade.

“We sincerely apologize for the delay in posting our financial filings to our shareholders as we have had many transitions to overcome over the last six months. As the first fully reporting Company in this sector, we have always strived to remain fully reporting with complete transparency to our investors. It is important to realize the prior six months of filings do not in our opinion reflect the intrinsic value of our accomplishments over the last sixty days with our recent product and corporate acquisitions. Our plans for new recreational markets, namely California, are just beginning to show fruition. We look forward to increasing sales revenue through our new products and acquisitions within regulated jurisdictions as we prepare to take full advantage of new recreational markets nationwide and position ourselves as a meaningful player in the public cannabis sector,” stated B. Michael Friedman, CEO of Agritek Holdings Inc.

We’ve witnessed 5% piled on for shareholders of the name during the trailing week. The situation may be worth watching. AGTK is a stock whose past is littered with sudden rips. Moreover, the name has seen interest climb, with an increase in recent trading volume of 15% over what the stock has registered over the longer term. This swell in volume is mostly clearly evident over the past 3 sessions.

Earning a current market cap value of $9.1M, AGTK has virtually no cash on the books, which compares with about $163K in total current liabilities. AGTK is pulling in negligible trailing 12-month revenues of $3K. However, the company is seeing declines on the top line on a quarterly y/y basis, with revenues falling at -55.3%. This will likely continue to be a very interesting story and we will look forward to updating it again soon. For continuing coverage on shares of $AGTK stock, as well as our other hot stock picks, sign up for our free newsletter today and get our next hot stock pick!